I had spent the past week giving my family all the reasons why I wouldn’t be hiking on Labor Day weekend. “It’s still just so hot.” “The trails will be crowded and I don’t want to deal with dummies.” “I don’t even know if I have all my hiking stuff here!!”

But somehow on Saturday I found myself packing up my frameless pack for a quick overnighter. 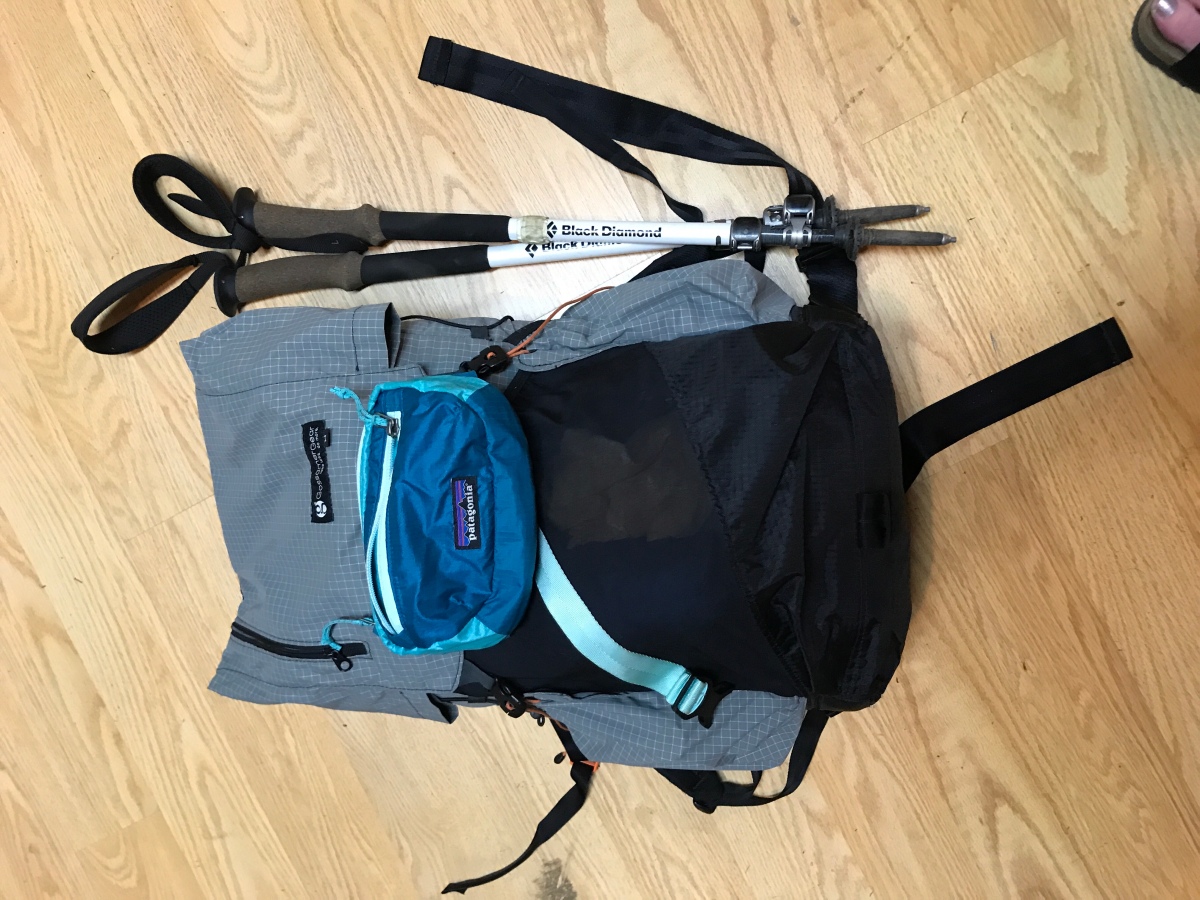 I left Sunday morning and drove to Adams Gap trailhead. I had decided to do the PinChinSky Loop, which uses the Pinhoti Trail, Chinabee Silent trail, and Skyway Trail to form a 16.7 mile loop. 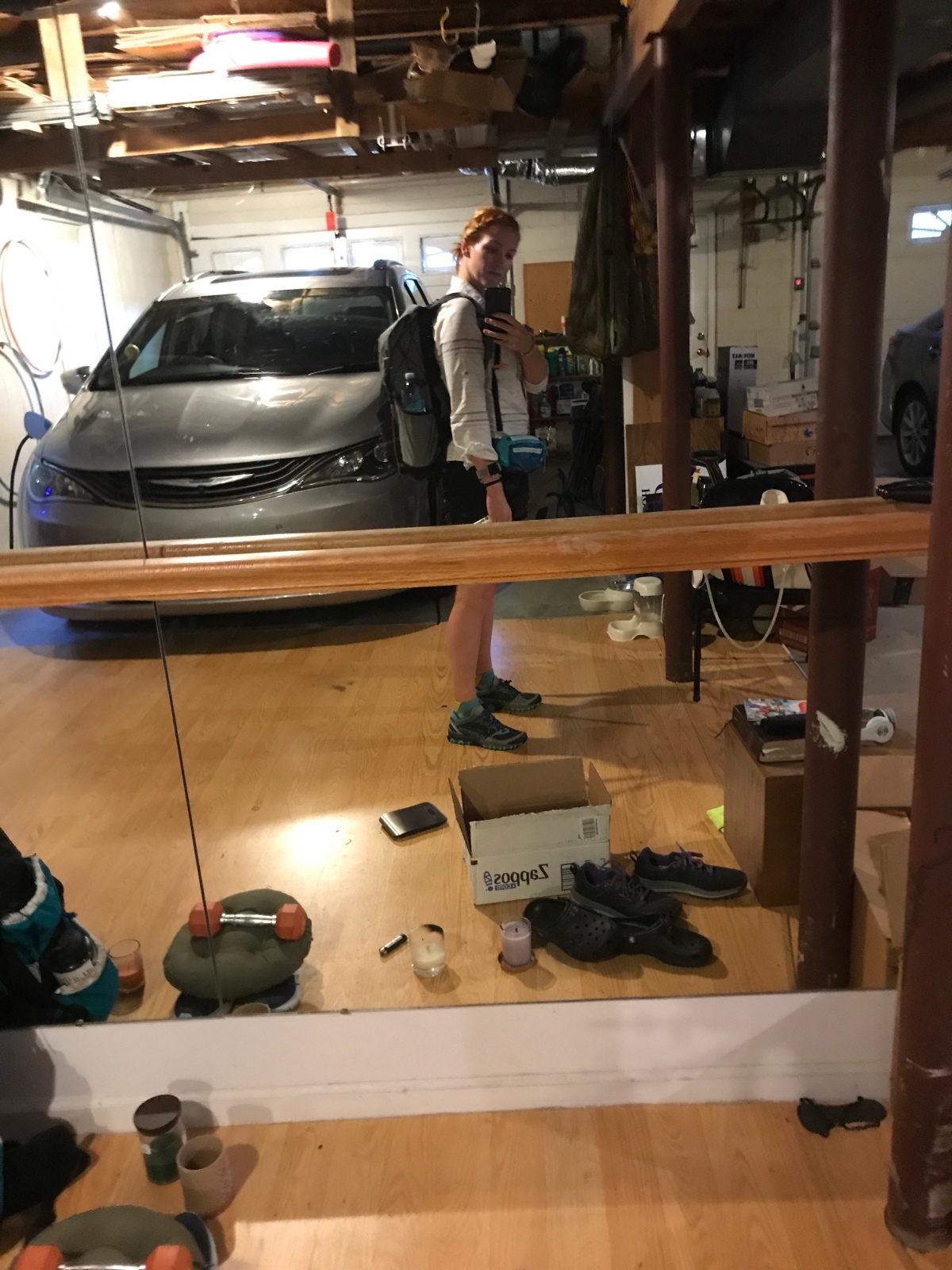 I started on the Pinhoti and was immediately drenched in sweat. The trail was pretty overgrown, but not nearly as bad as it would get later. The first few miles of the trail were just giant spiderwebs WITH GIANT SPIDERS.

Things got a little rocky, and I started on the (only? First? Biggest?) climb of the day.

The guide said I was headed for “Pearly Gates” and I would have to “see it to believe it!!” 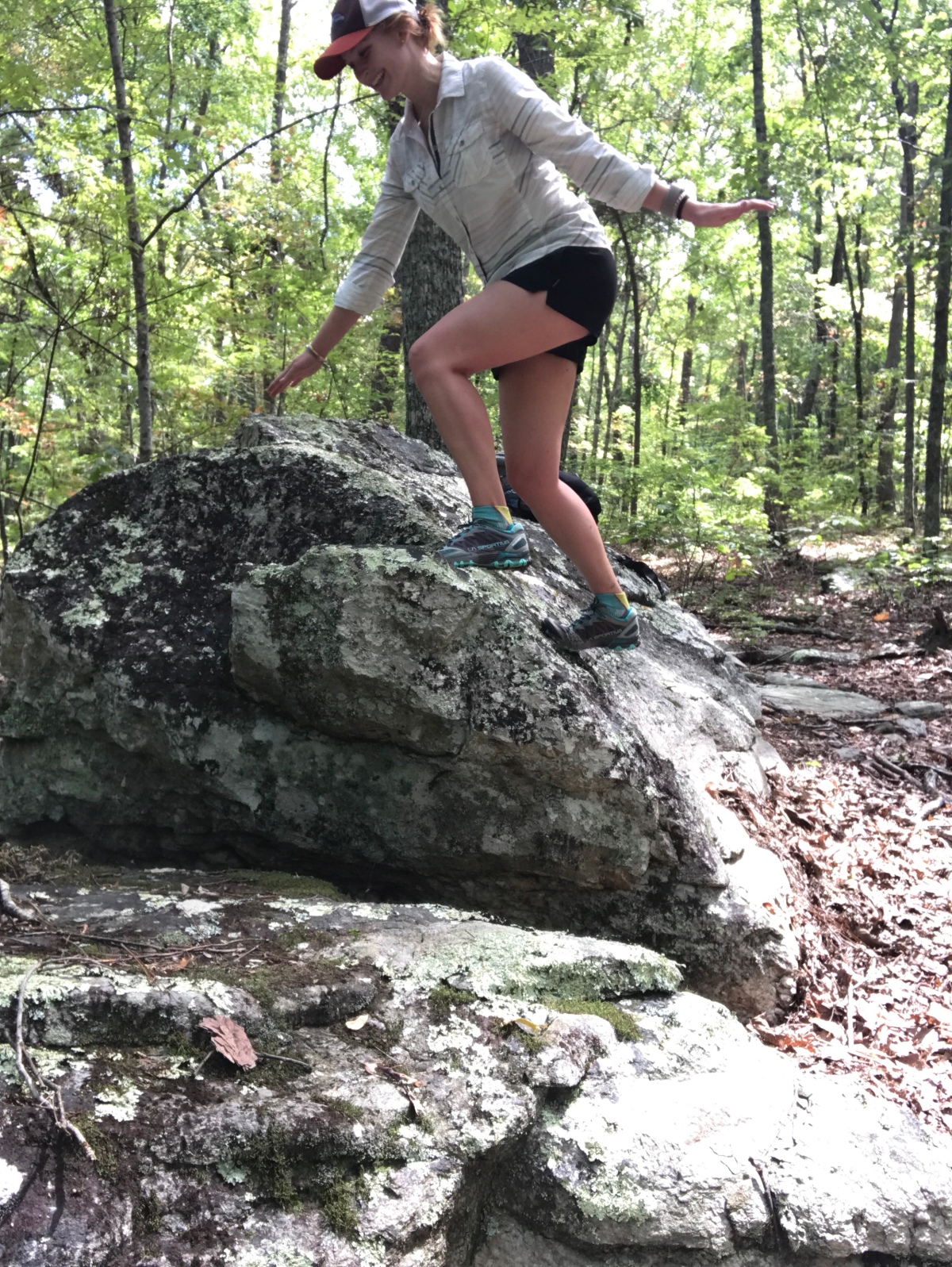 I found this pretty decent view 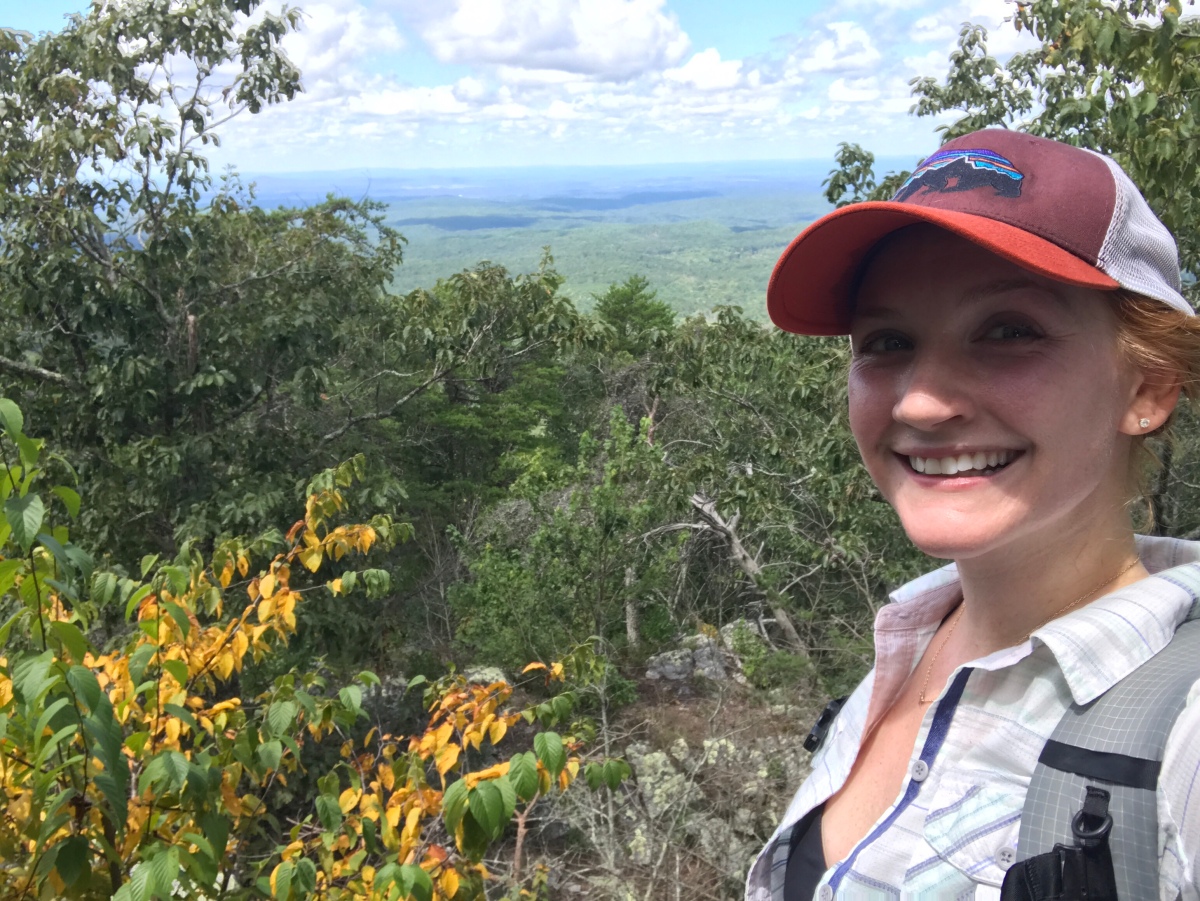 But I’m still not sure what the Pearly Gates are.

At this point I was running low of water. I’d started out with 2 Liters and I had about .5L left. I knew I was close to a water source, so I booked it there.

Unfortunately this was the water source.

I turned onto the Chinabee Silent trail and headed down off the ridge. 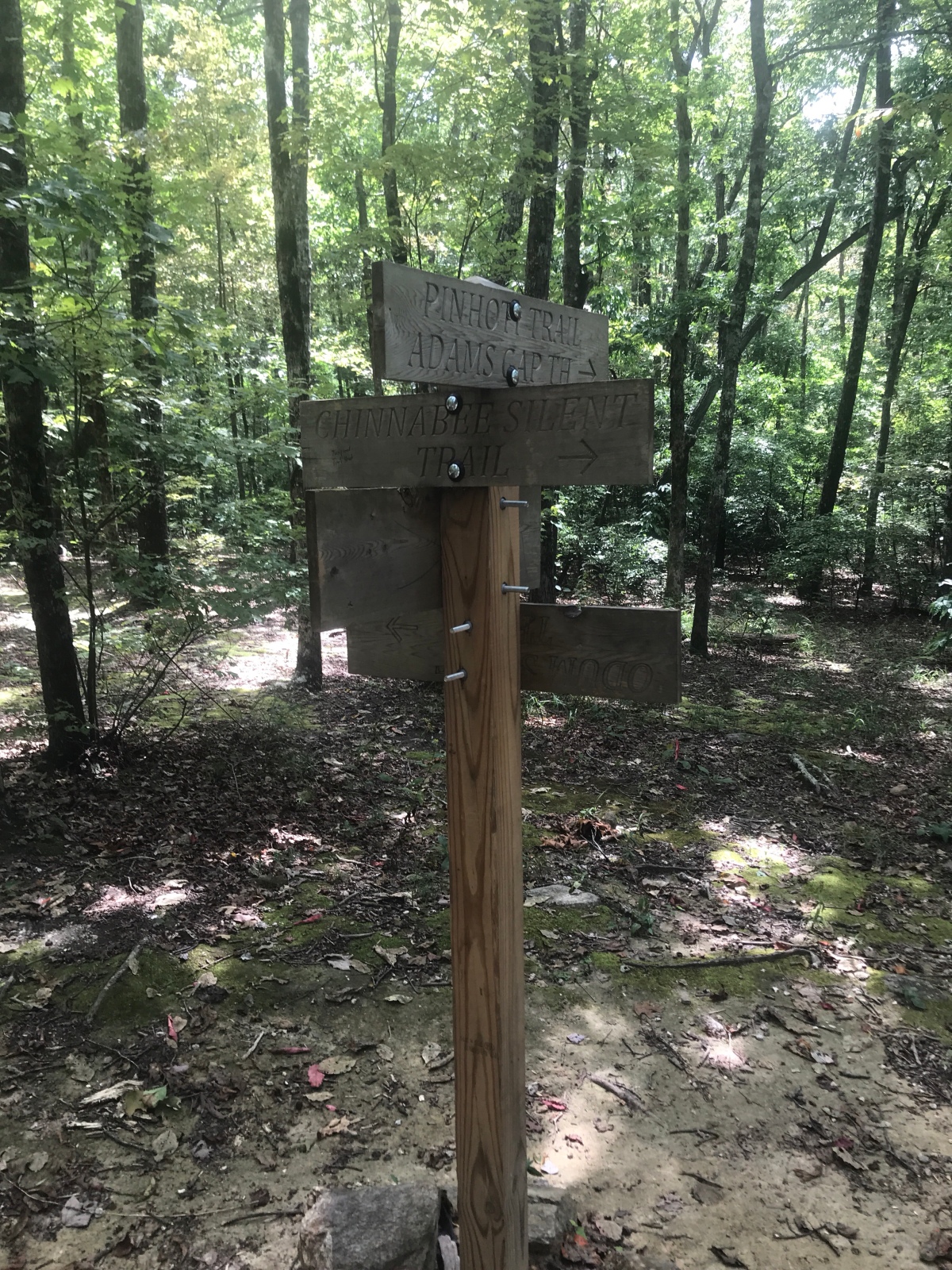 I found some muscadines and popped them in my mouth, chewing on them as I thought about how thirsty I was.

Fortunately there was a nice wide stream waiting for me at the bottom of the ridge. I filled my water and washed the sweat off my face. 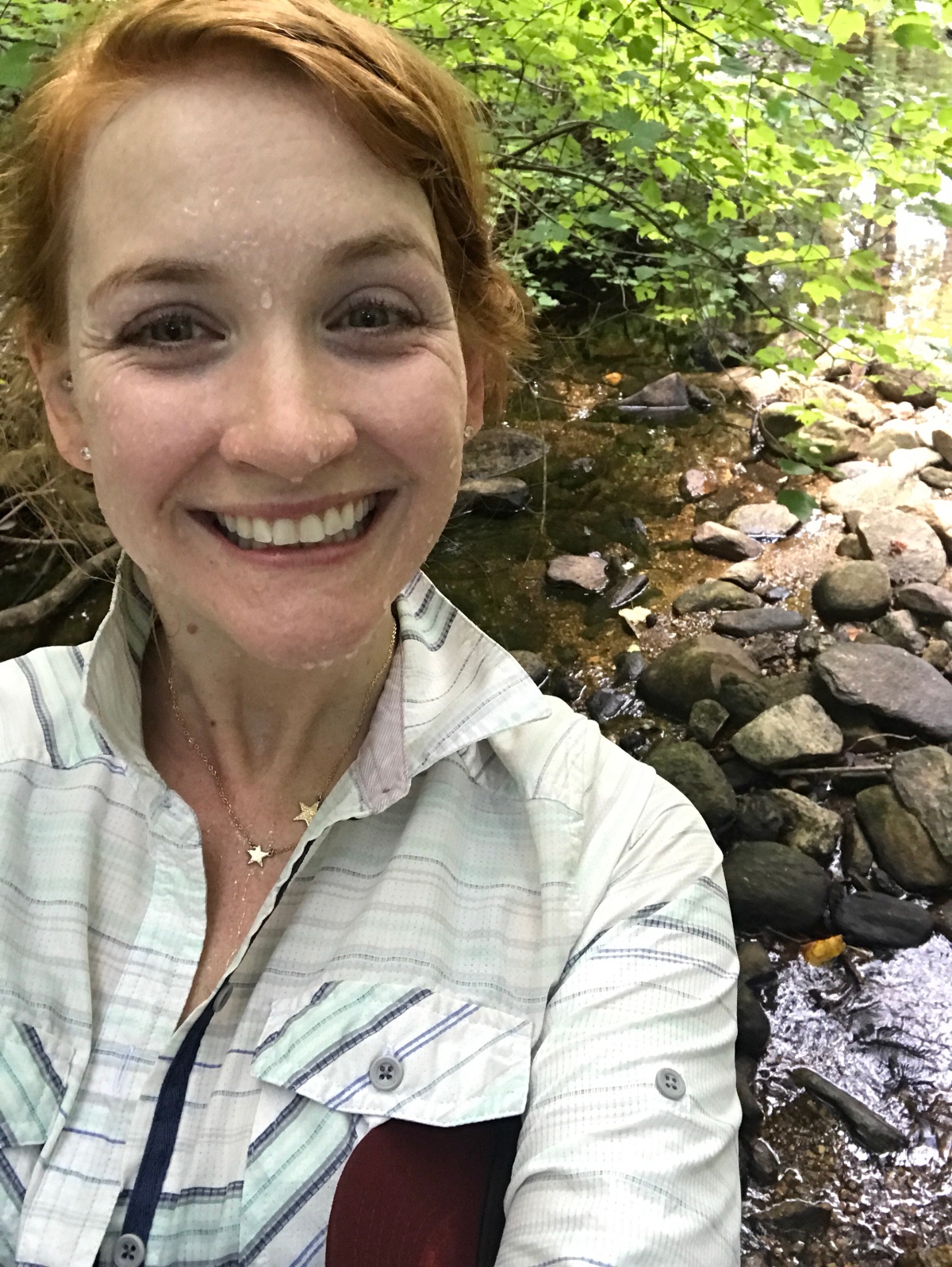 I stopped for lunch at a campground.

Right next to Cheaha Falls I found a couple setting up what could only be a 12 person tent. I took a covert picture of it. It was taller than the man setting it up.

The shelter looked pretty packed and it was still early, so I pushed on.

I stopped at another stream to cool off. 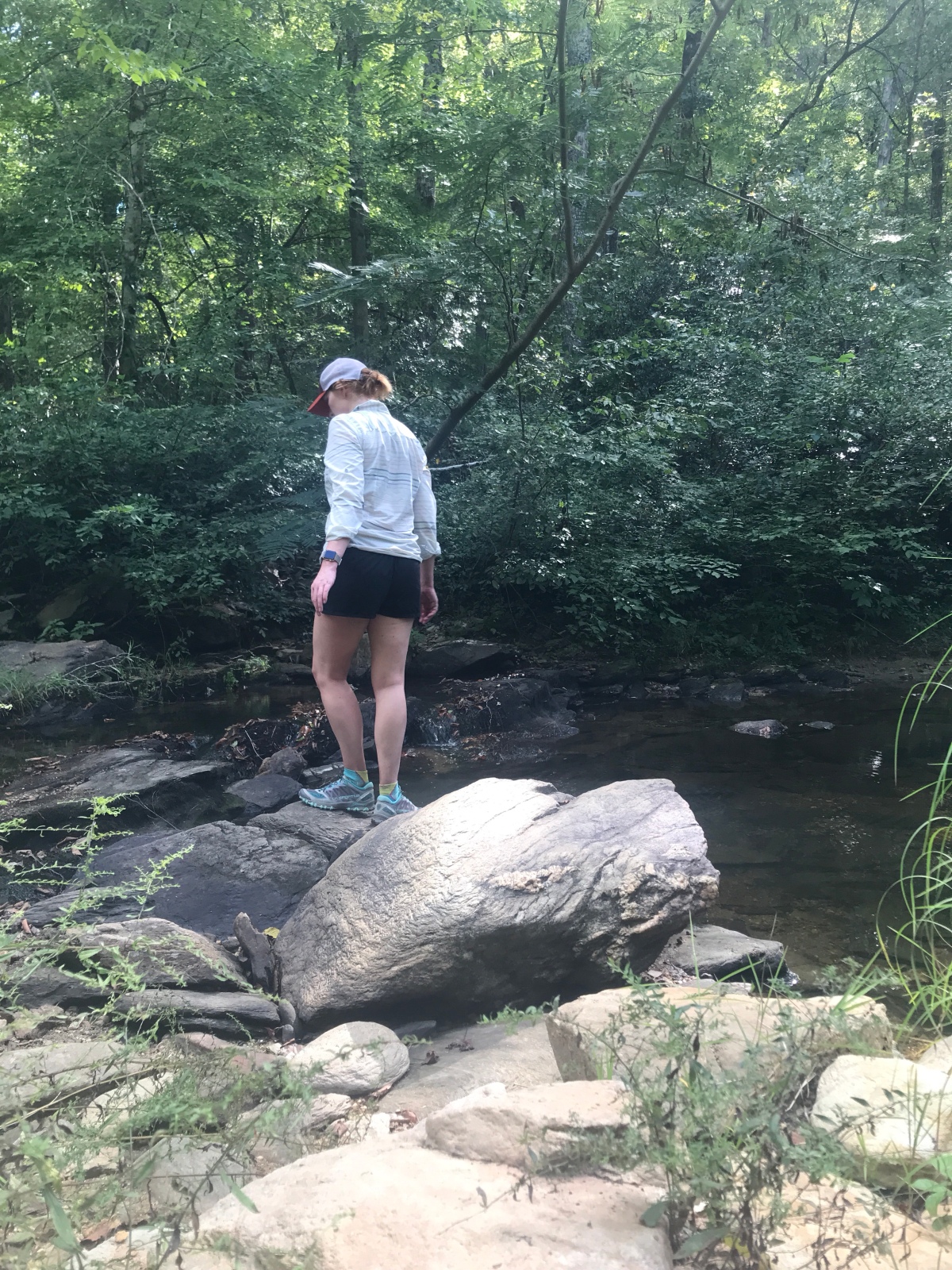 Then across the footbridge and then down to the Skyway Trail. The trail isnt well marked. It took my forever to figure out where it crossed the stream.

At Hubbard Creek I had another struggle to cross the stream. I was thrown off my a couple camping there who said they thought the trail went off in a different direction. They were wrong, it crosses immediately. 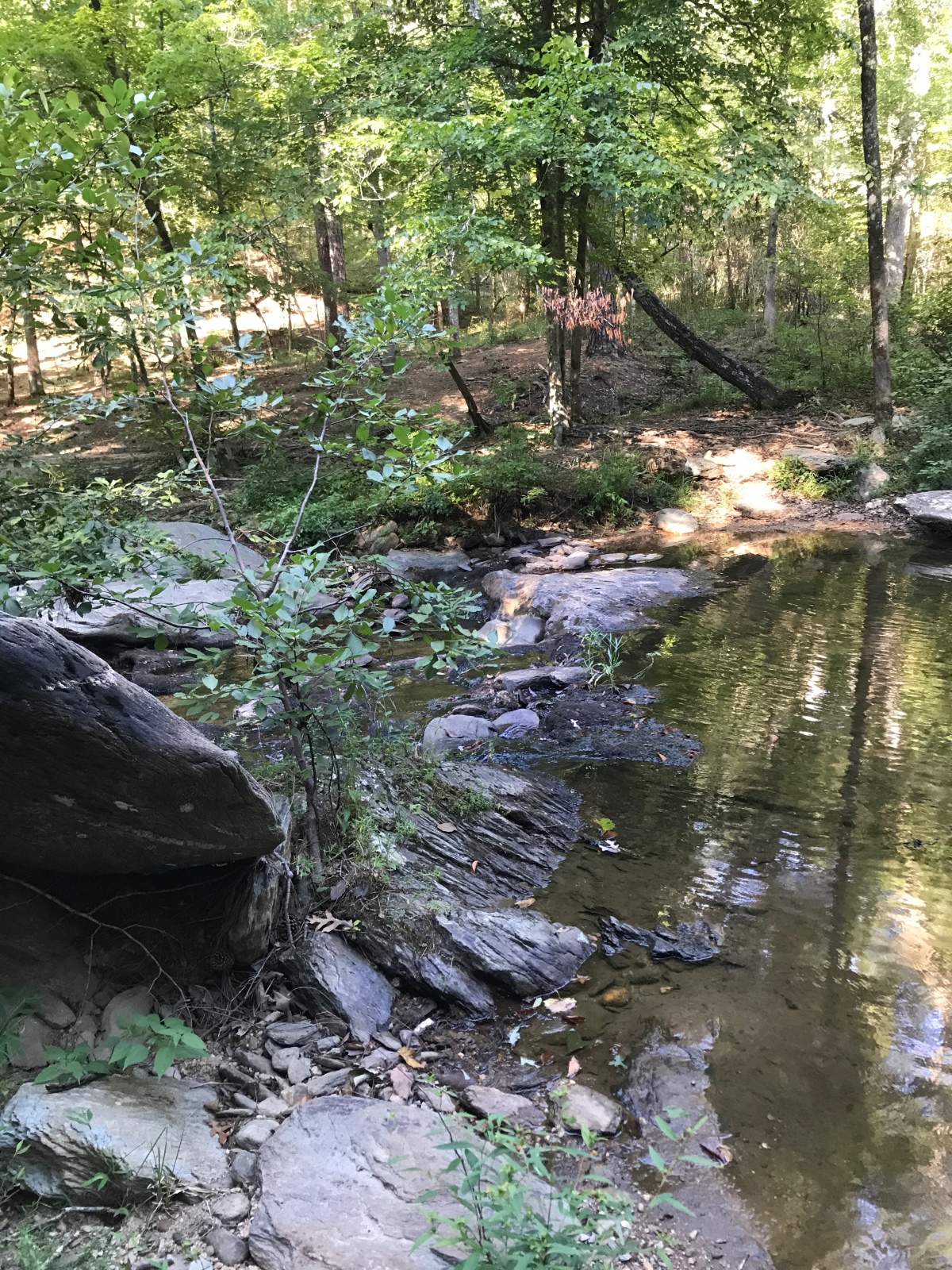 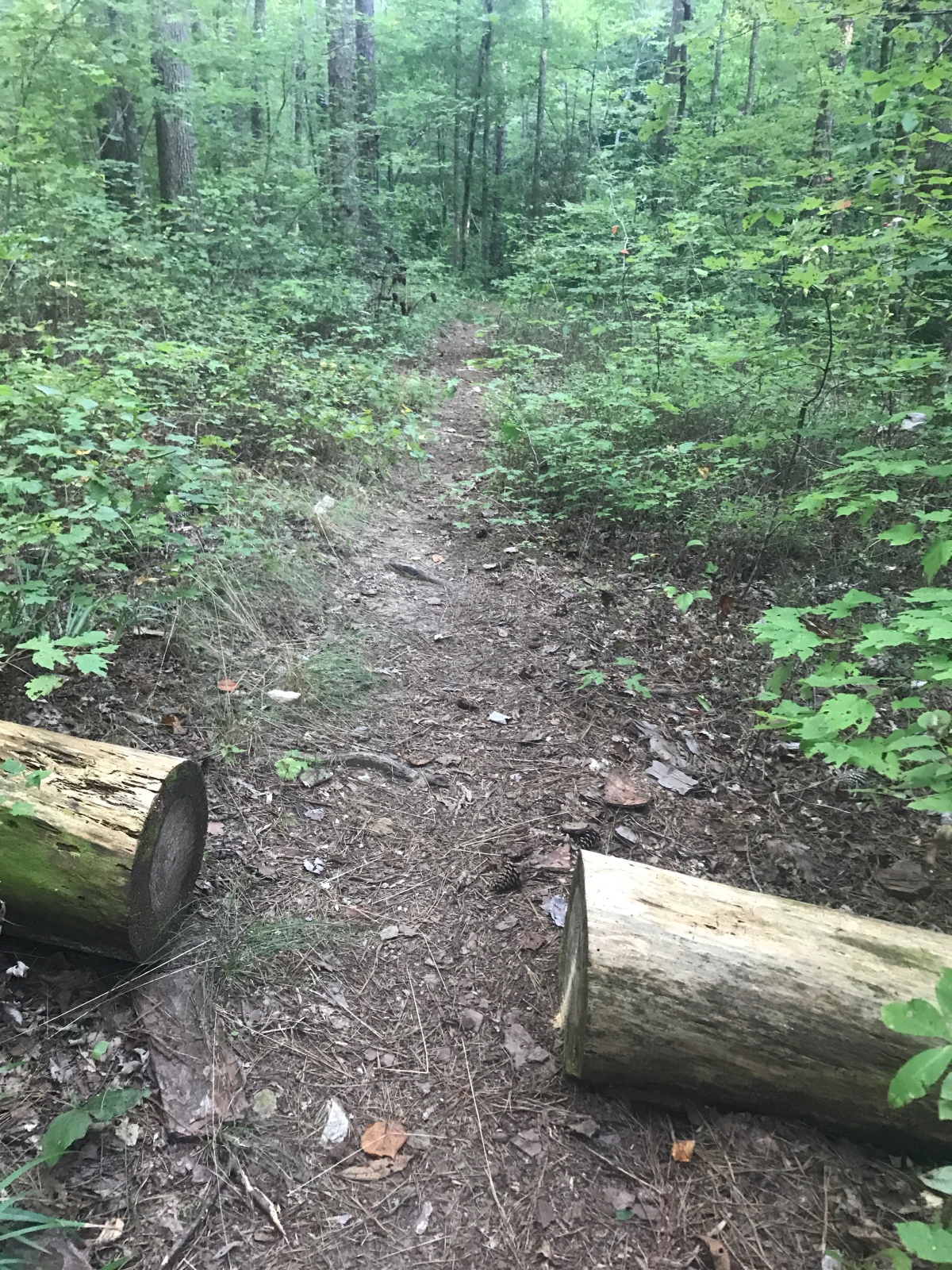 The sun started setting much sooner than I thought it would. It glowed orange through the trees.

It got darker quicker. In New Hampshire, the early June sunset lasted hours. Now, down here, it went from orange and glowy to gloomy and dusky in minutes. I stopped and dug through my pack to find my headlamp. A new pack means new organization, and I hadn’t put things where I normally would have. For whatever reason. Probably laziness.

I was getting tired. I hadn’t eaten dinner, I kept turning my ankles, I was still actively sweating, and anywhere I tried to sit and take a break was evidently home to huge swarms of yellow jackets. I pushed on and on.

I came to a campsite and a stream in the dark. I could find the trail through it in the dark, so I figured I might as well sleep. I figured I was only a mile or two from the car, so I’d be out early and wouldn’t get lost.

I wandered around trying to decide where to sleep, then picked a rock, a flat spot, and threw down my pad for some cowboy camping. 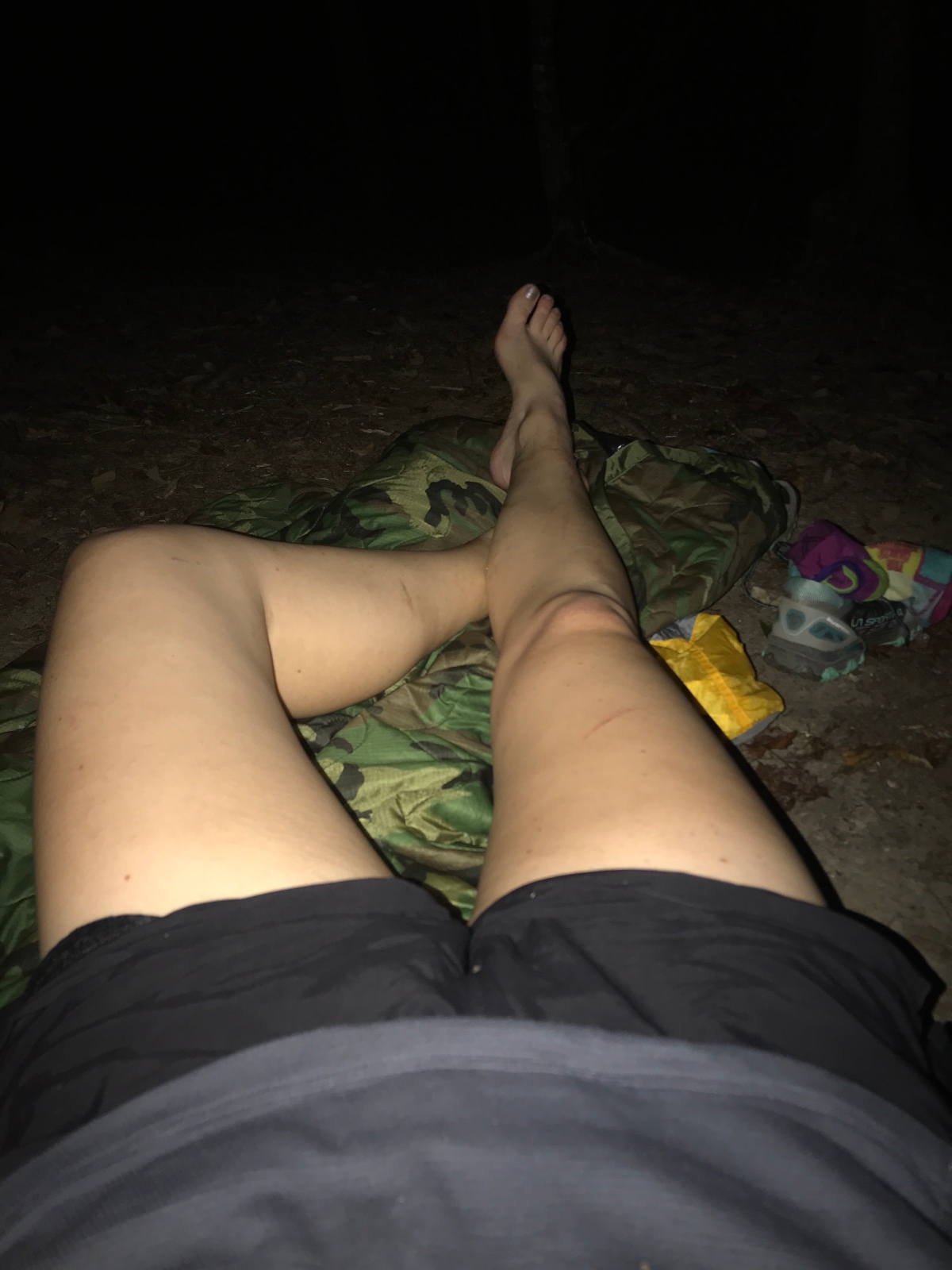 It was some pretty good sleeping. The bugs were so loud I had to turn up the volume on the podcast I was listening to. The stream was a faint sound behind them. The trees were thick so I couldn’t see the stars, but lightning bugs flashed.

I woke up slowly, and even fell back asleep before I got up. I packed up and headed out.

I had a slow climb back over a ridge to get to the car. It wasn’t bad. 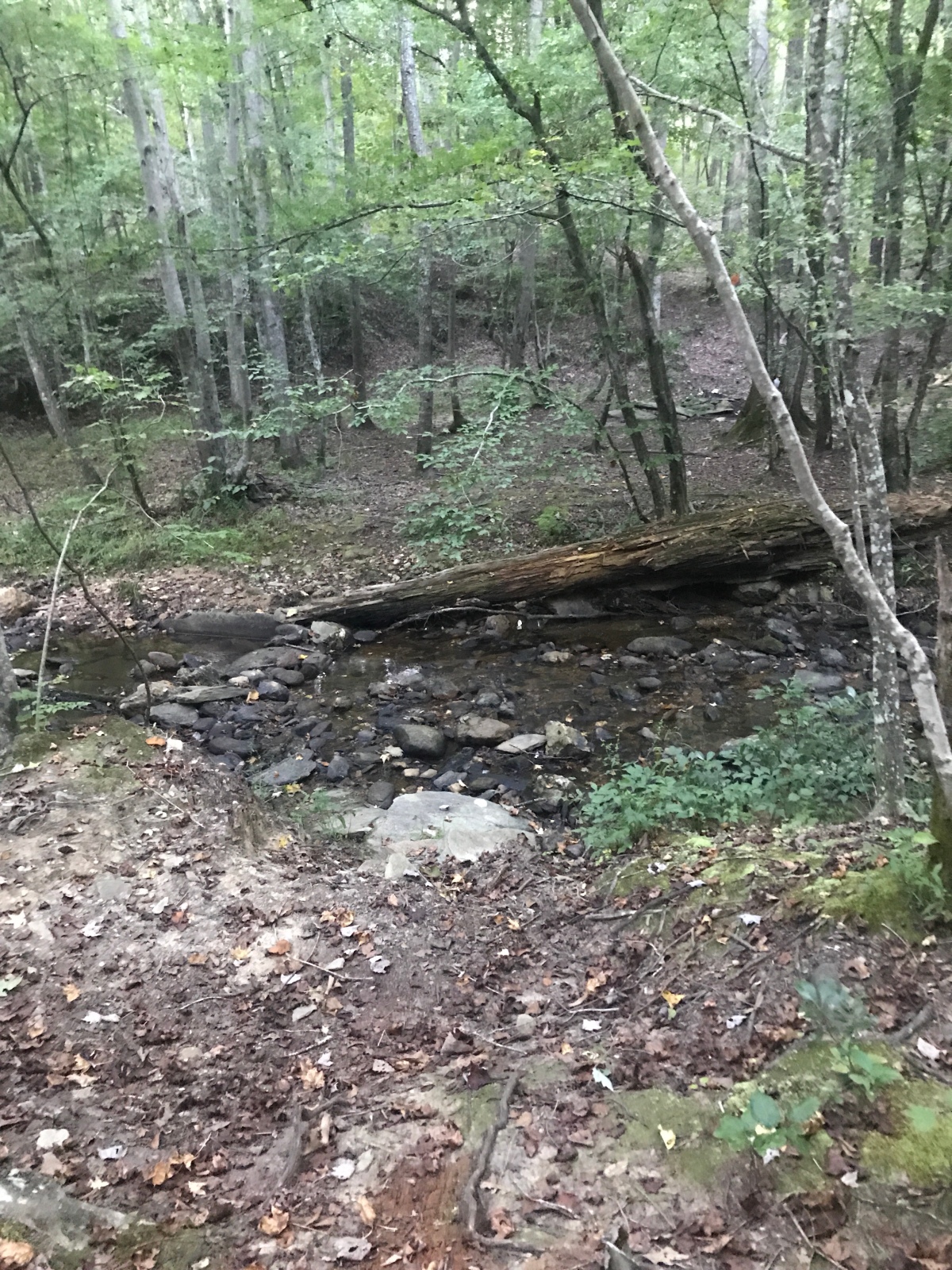 I got back to the Pinhoti and was almost back to the car when I got one last parting gift from the trail — a giant wasp? bee? Nest to run under. 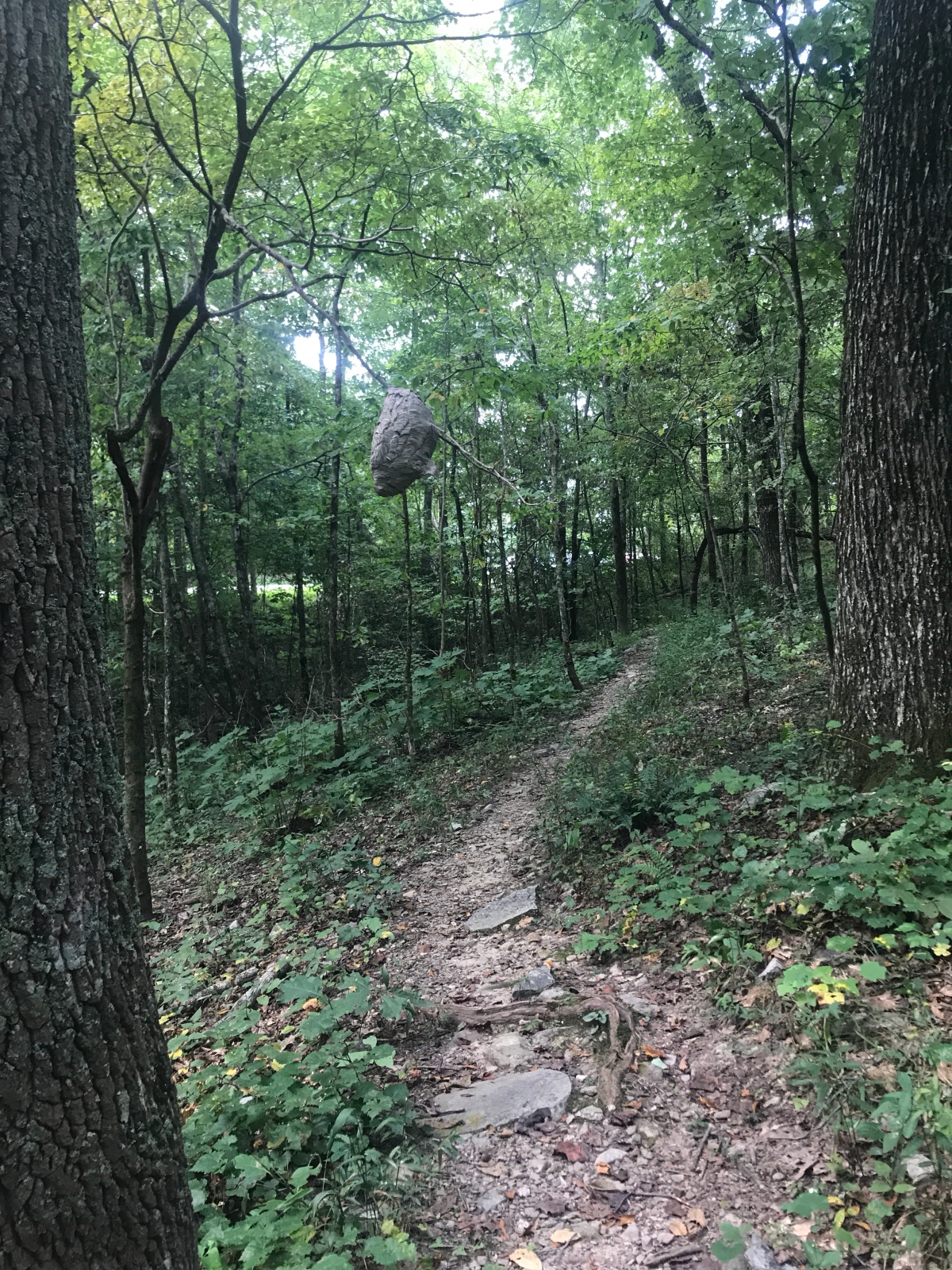 I can’t say I’d recommend the loop. If you are pressed for time and can’t drive further then I guess it’s a good choice, but it’s really kind of boring. I don’t see myself doing it again.

But I do see myself using a frameless pack again. My base pack weight was right around 7lbs and I didn’t need a lot of food for such a quick trip. My shoulders are a little sore, but it was nice to have such a light pack. 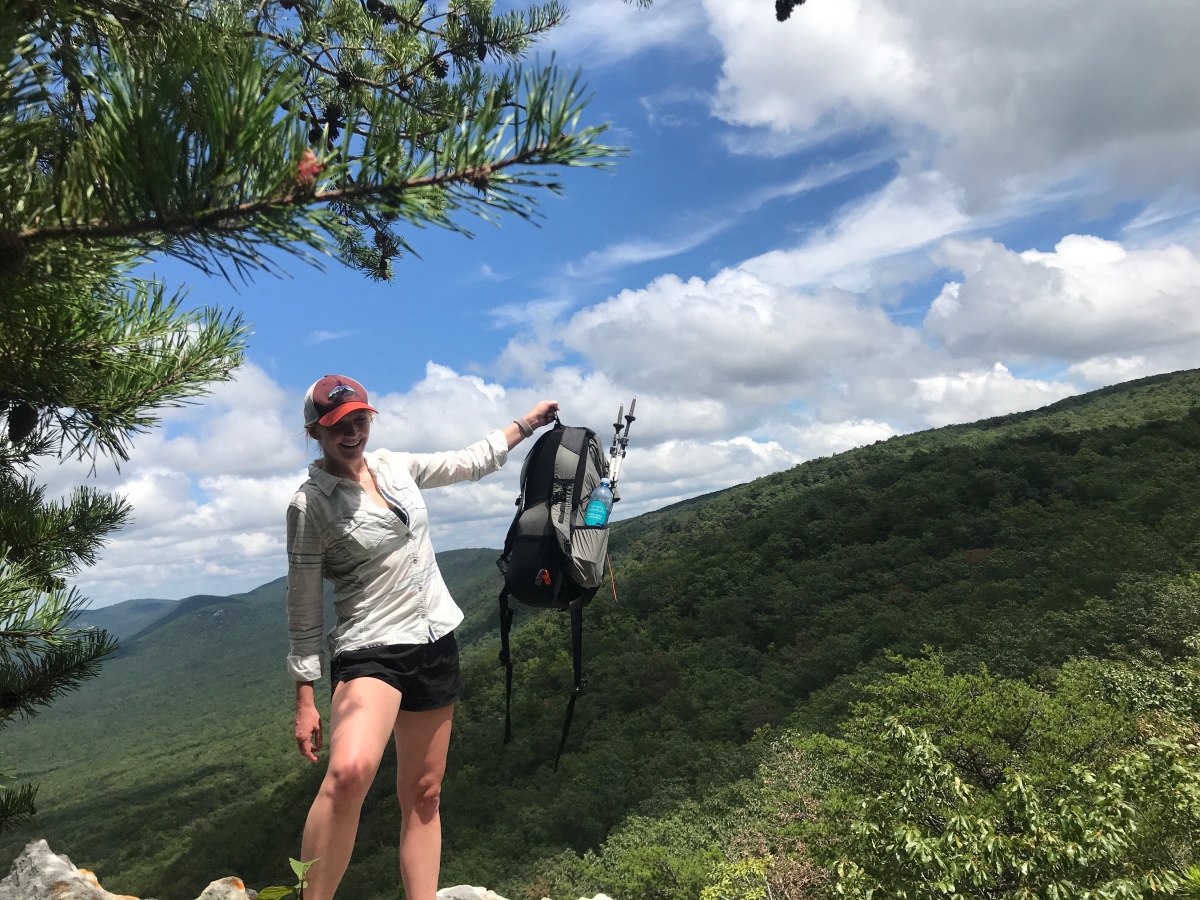 miles: 16.7 (total, also plus all the wasted miles I spent trying to find the trail at stream crossings)