1: Hanover to a stealth site

There’s something very calming about traveling. The way I travel isn’t always necessarily calming, but eventually, I find it relaxing.

Case in point: I got up with plenty of time to get to the airport, but hadn’t secured a ride. Augusta, the bustling metropolis that it is, had zero uber or lyft drivers at 5:30am. Quelle surprise.

So I drove myself to the airport, and yes, I will pay almost $100 to park there. But I’m an engineer now, not a student, and that makes it all better.

Anyways, I got to the airport, made it up to TSA, and then received a pat down because I was “sweaty” or something.

And then TSA threw away my peanut butter.

AND THEN my flight to Charlotte had “heavy fog” and had to do some special maneuver to land, which used such sensitive instrumentation that we had to turn off ALL electronic devices, not just put them in airplane mode.

We did land ok though.

Anyways, I made it to Boston, ran to Bent, then we took a bus to Hanover. In Hanover, we stopped at Zimmerman’s to pick up our packages that we’d mailed to ourselves, then went to the Co-op to buy food.

After a delicious “turkey and cheddar grinder” and a reprisal of the BEST apple juice I’ve ever had (Bent said, “ wow this tastes like the juice of apples!”) we hit the trail. 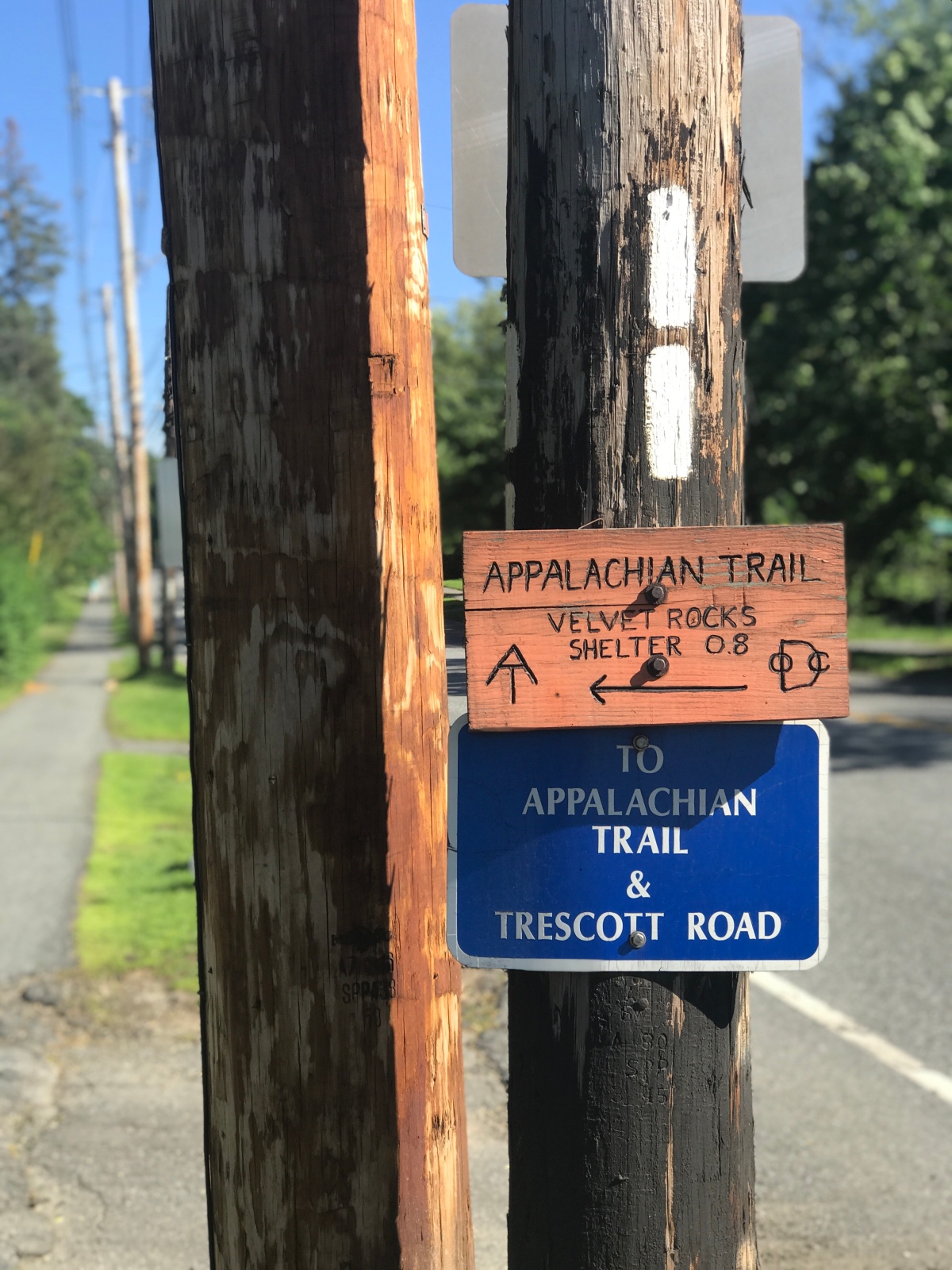 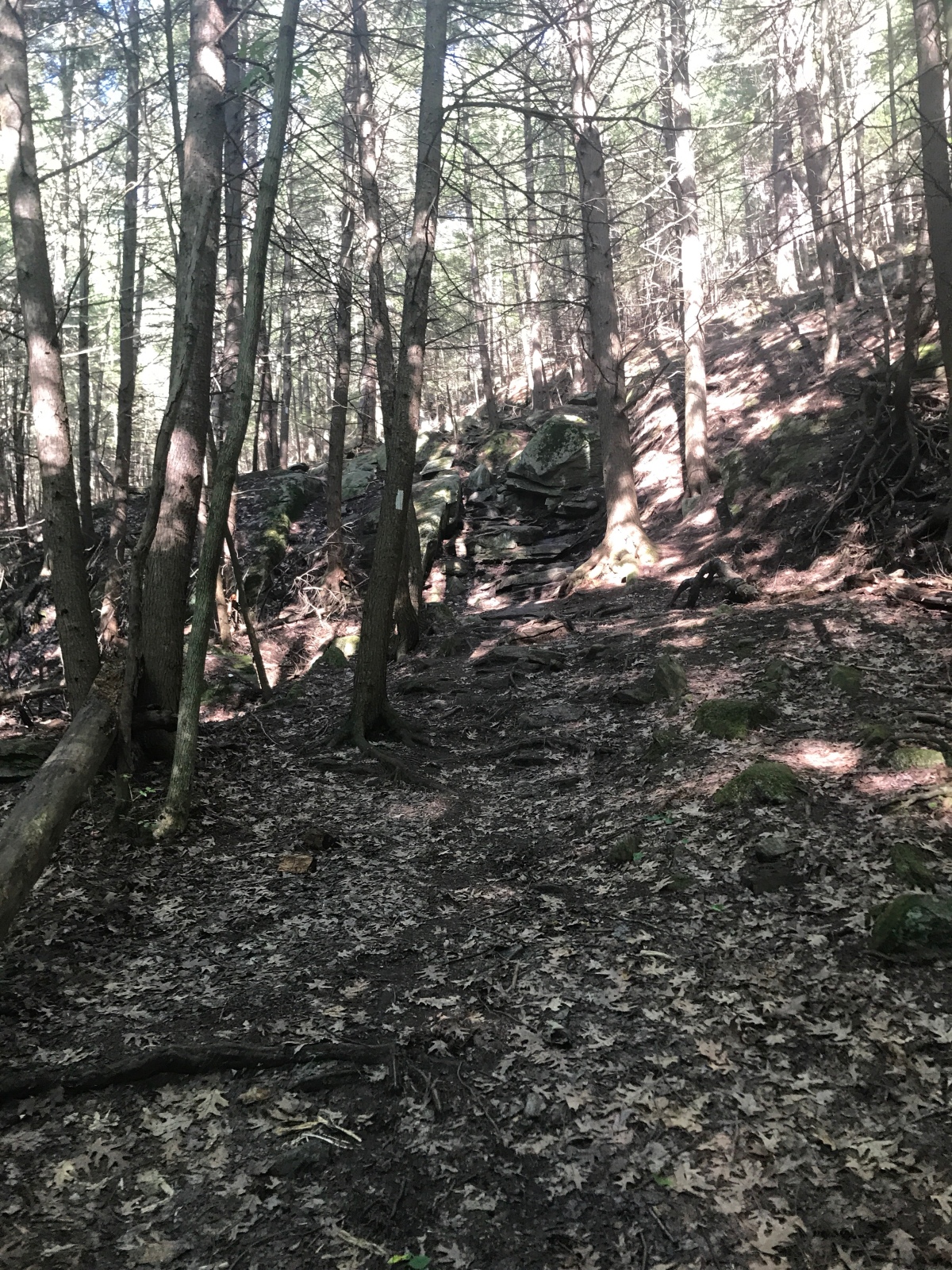 It was amazing to be back in Hanover, one of my very favorite towns. But the feeling of leaving it behind, stepping into the woods…that was incredible too.

The mosquitoes were out in full force, and we paid for every single day we’d been off trail. The air was heavy and humid, the climbs were steep, and we were as happy as two people can be. 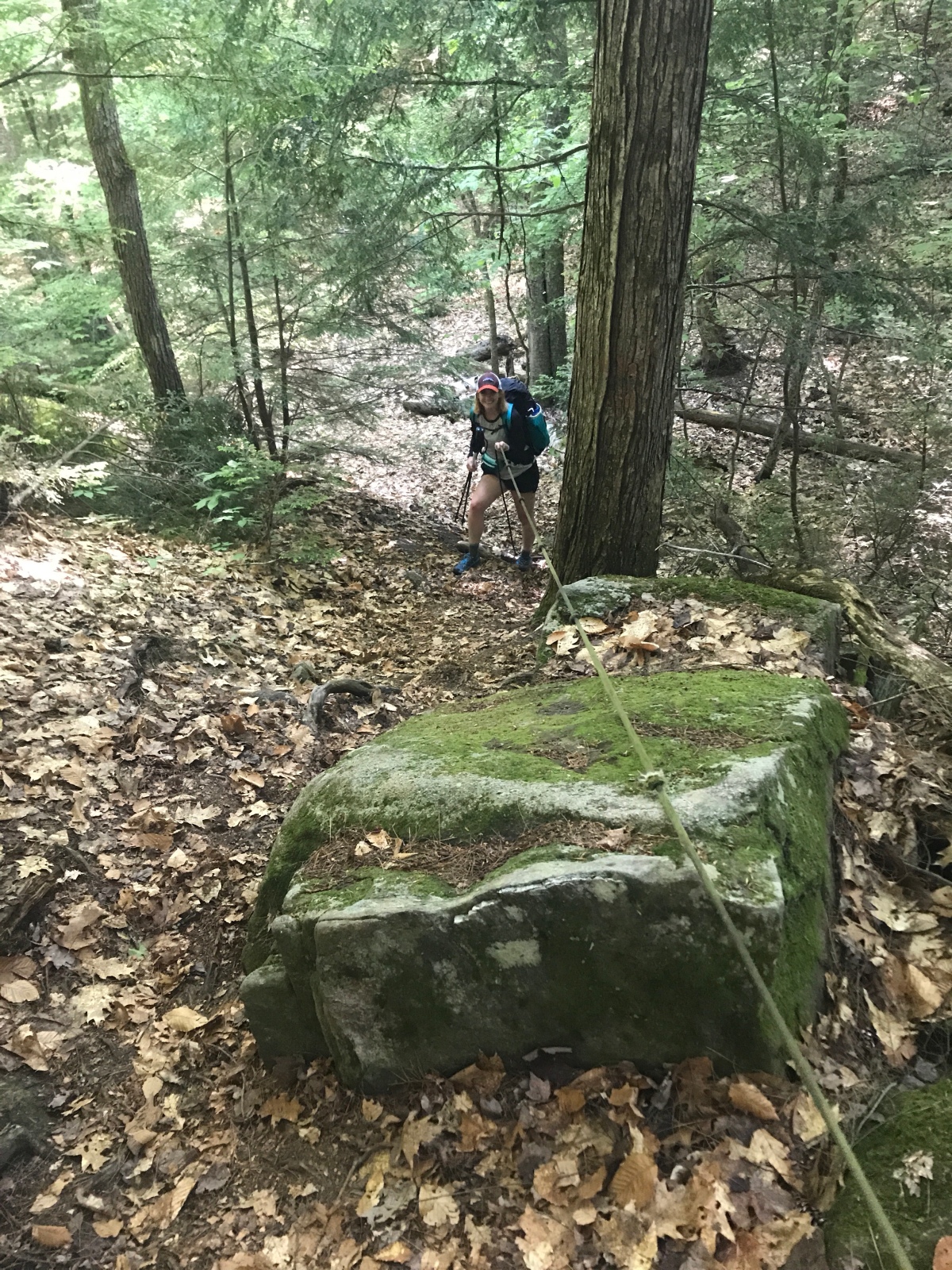 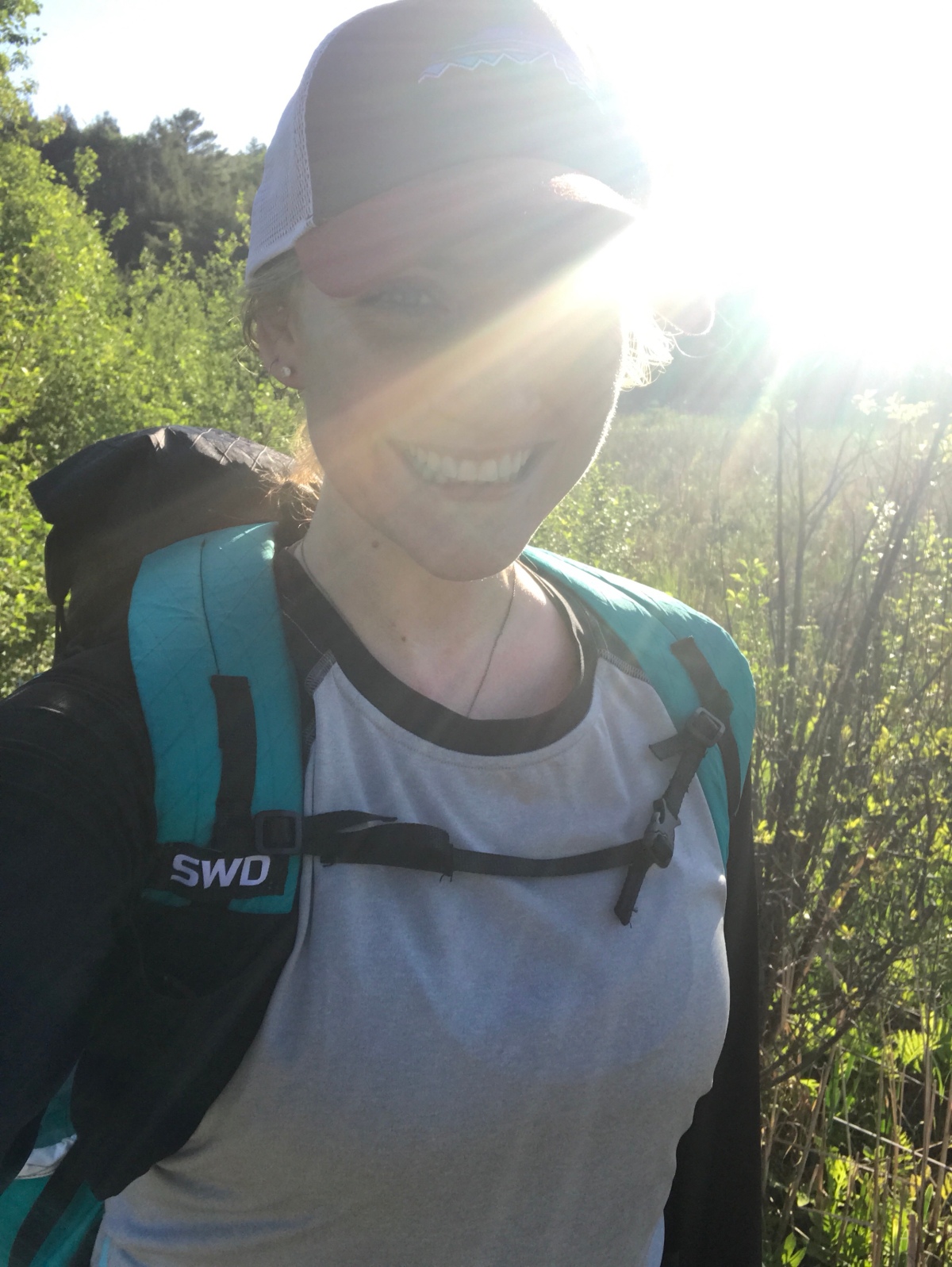 We managed to find a decent spot to Camp for the night, so we set up our “homes” and ate dinner before heading off to sleep.

LVP: I got a mosquito bite INSIDE my ear.

My parents gave me an alarm clock for my birthday (I asked for it, it wasn’t a passive aggressive thing or anything). It simulates sunrise, and I programmed it to wake me up with bird sounds. 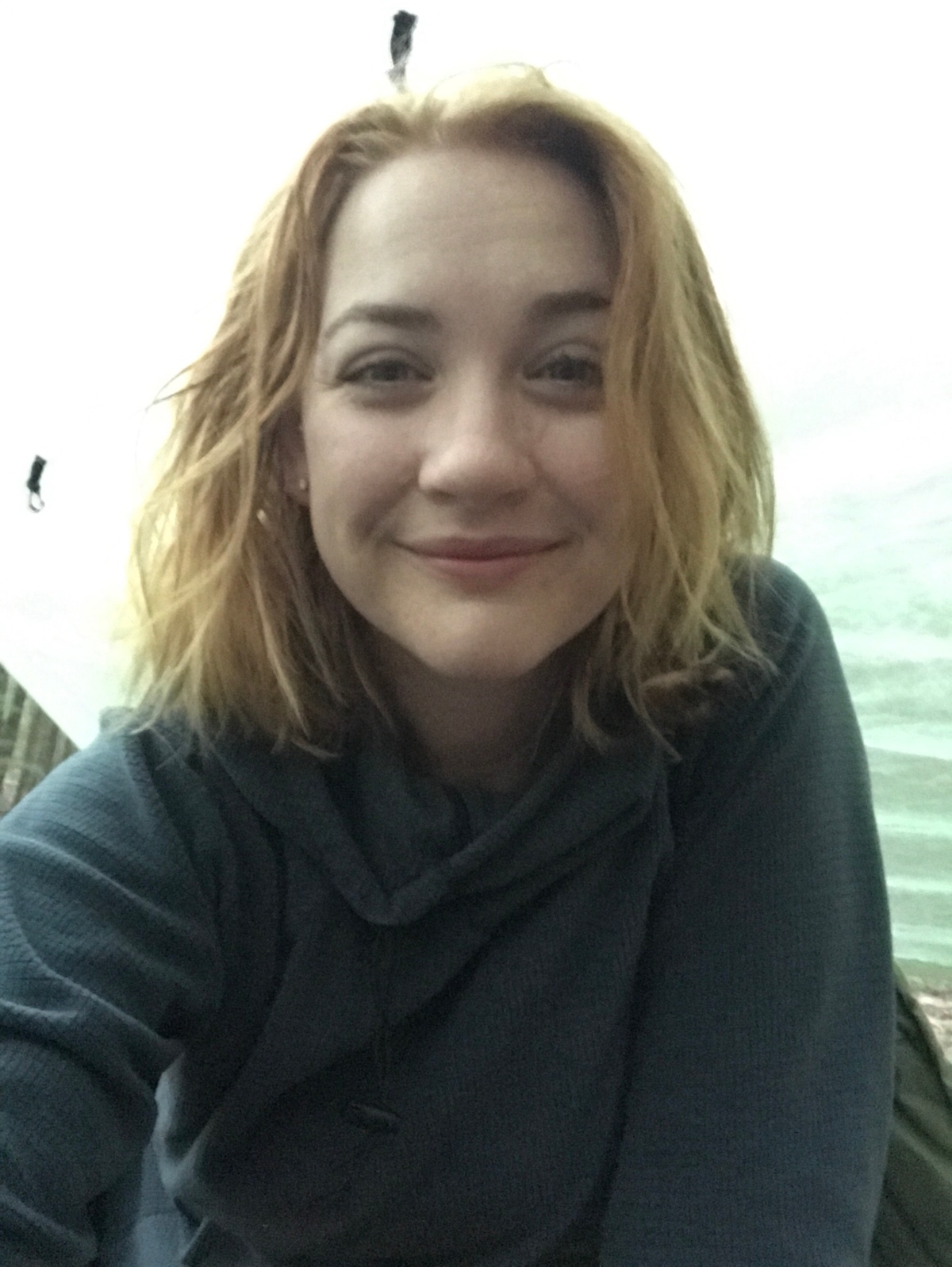 When I woke up today, it was to the sun rising through the trees as birds sang from the branches. It was peaceful and tranquil and is one of my favorite parts of sleeping outside.

We had breakfast and packed up. The weather was lovely, with a nice breeze to keep the mosquitoes at bay.

We walked through some beautiful meadows, the air heavy with the sweet hay smell that I remembered from Massachusetts and Vermont. 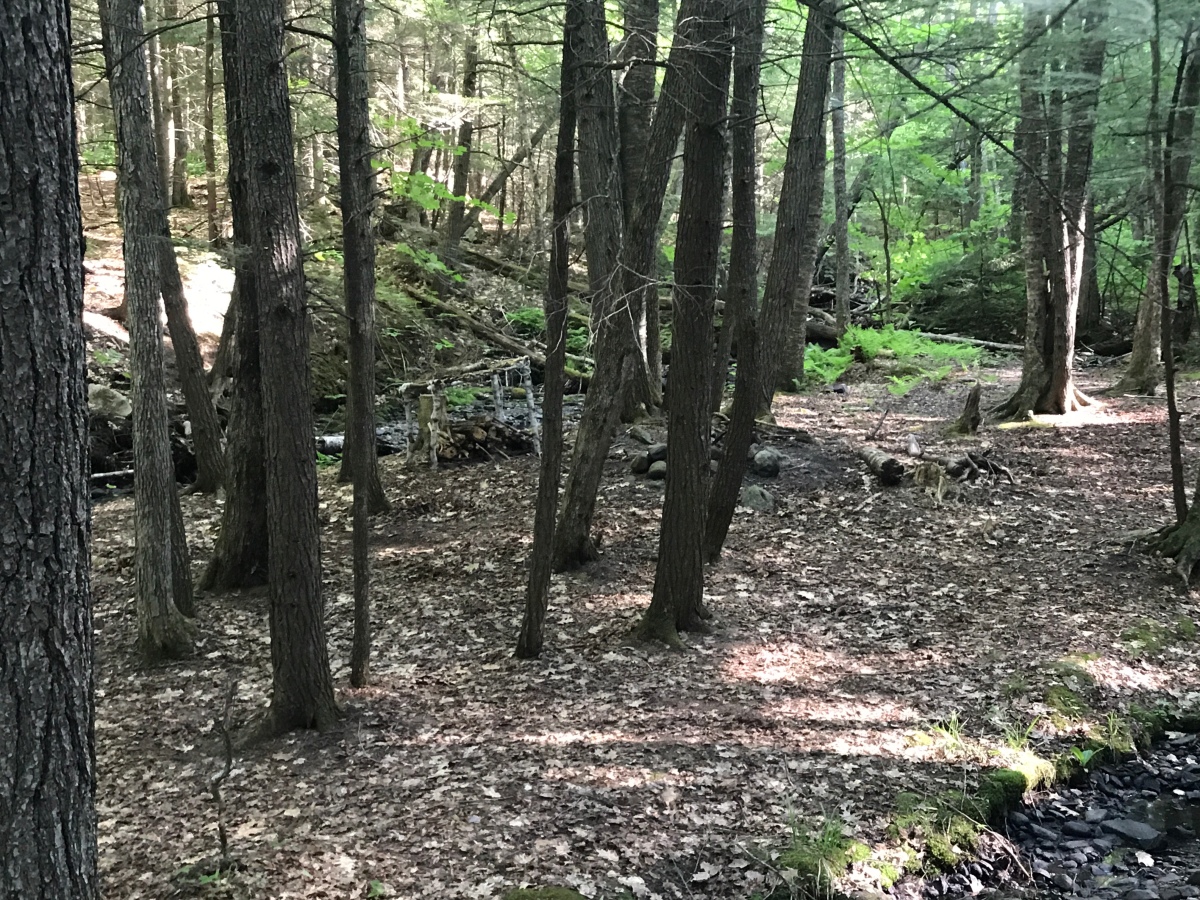 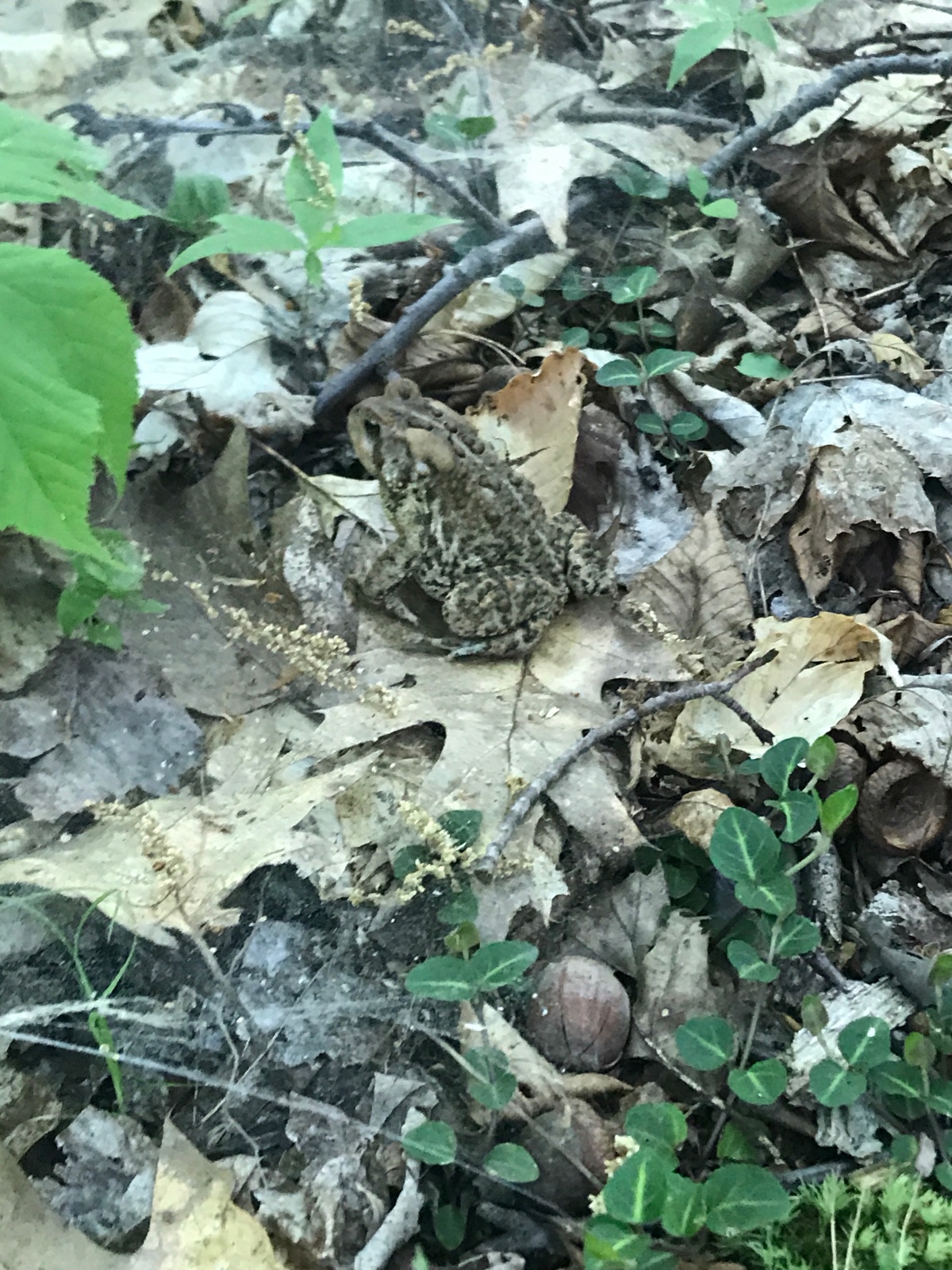 We made it up to Moose Mountain South and stood to appreciate the views. The day was getting warmer, but the bright sun just illuminated the green mountains around us even more. They positively shone. 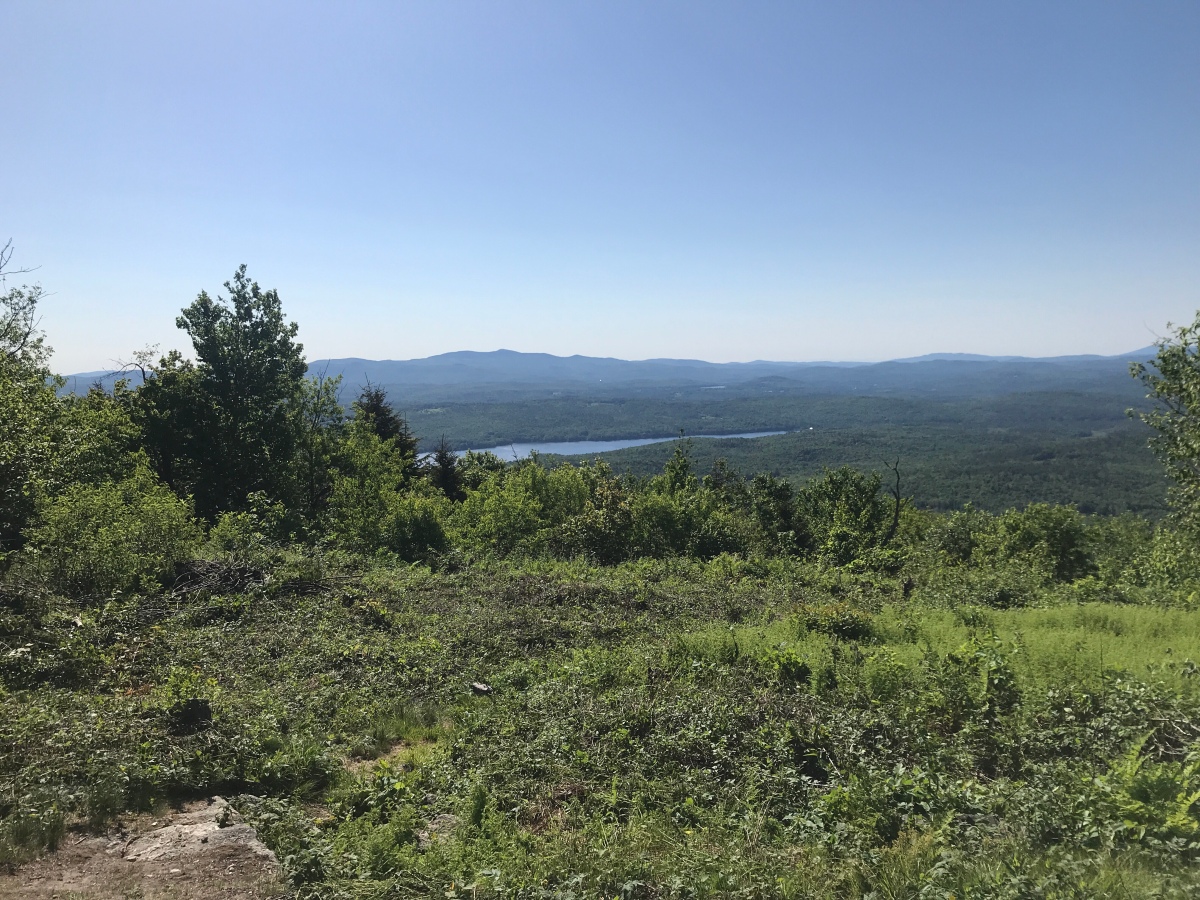 We went down to moose mountain shelter, intending to fill up on water and take time for lunch. Sadly, there was no water. 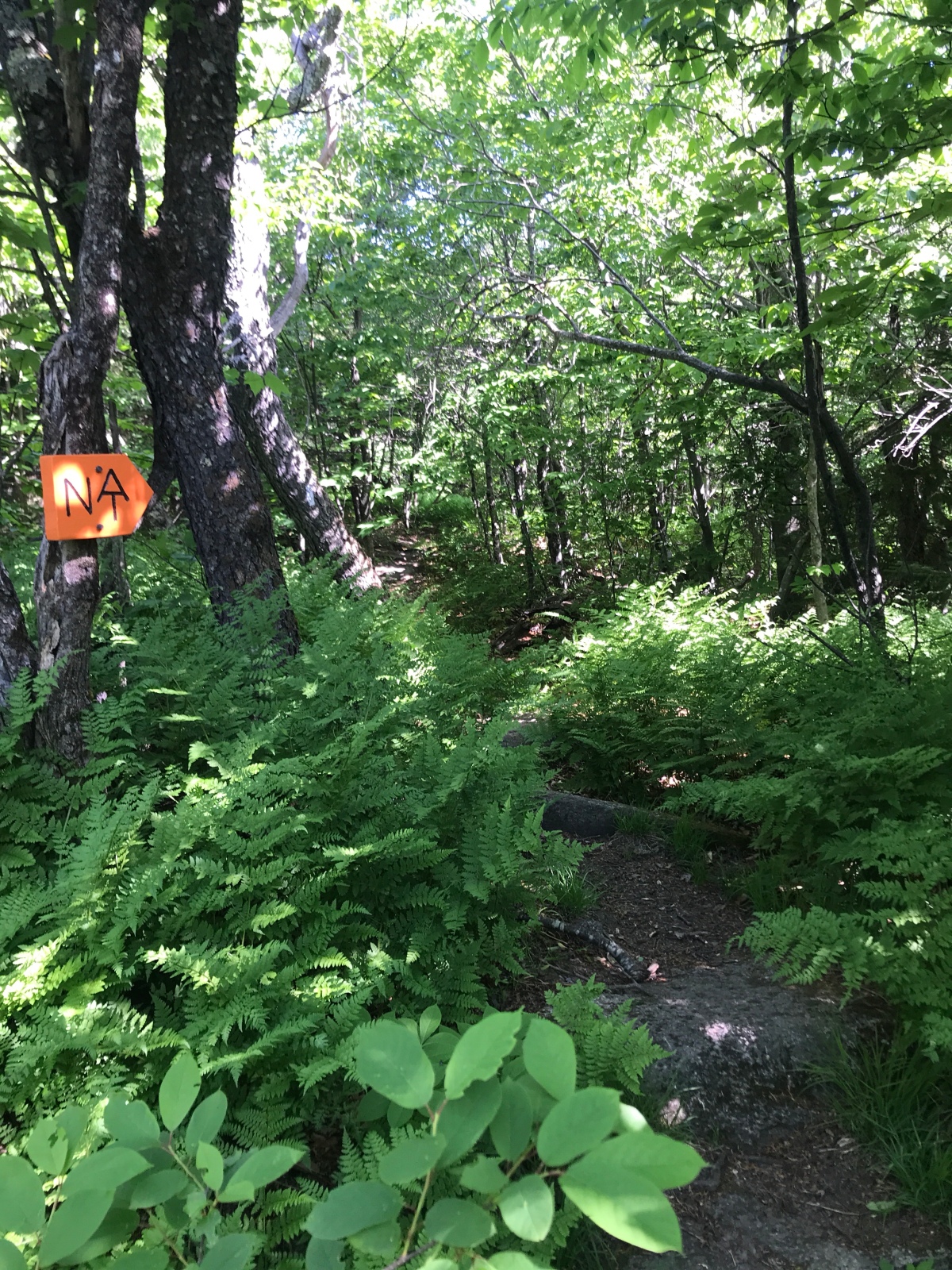 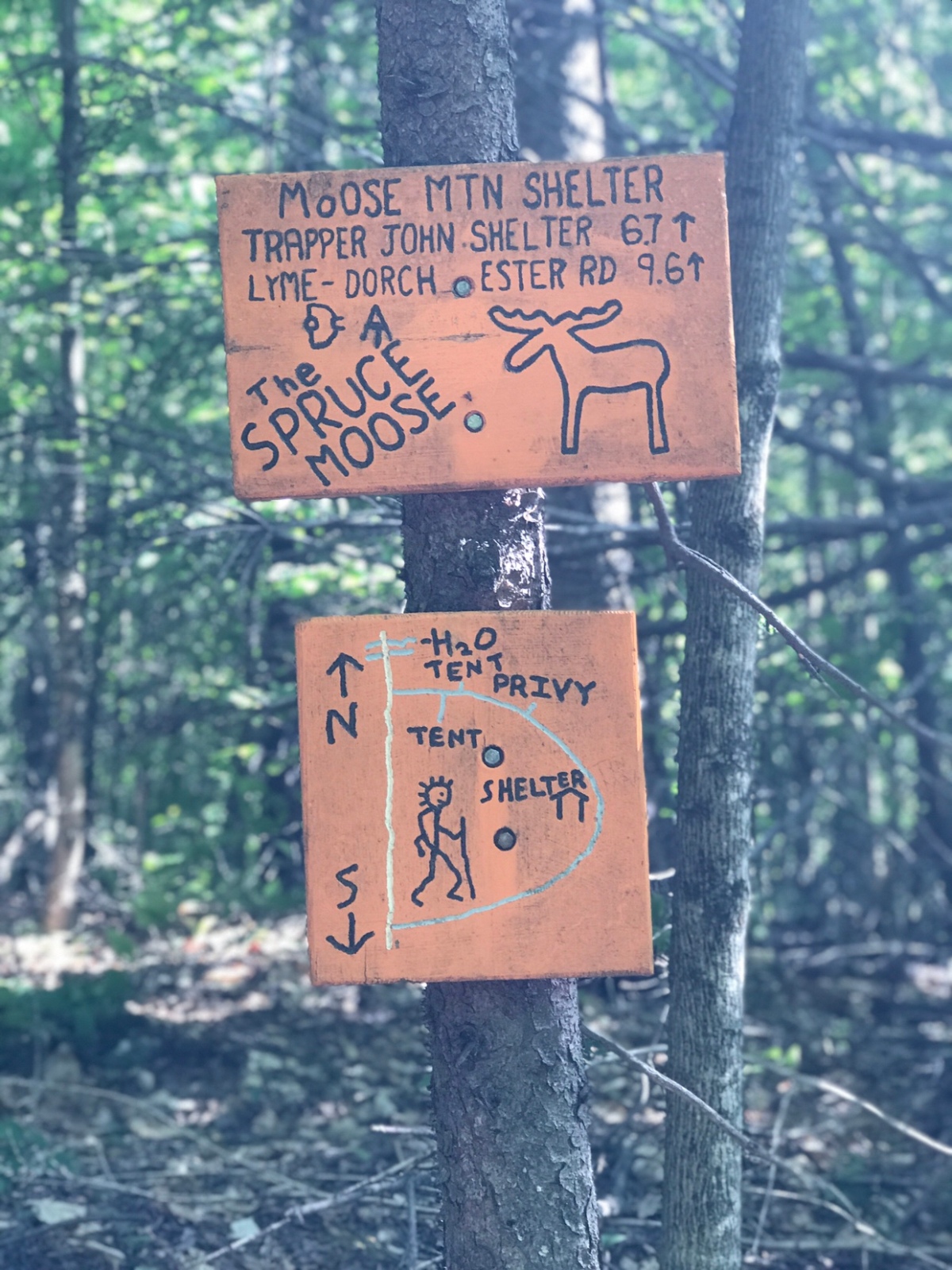 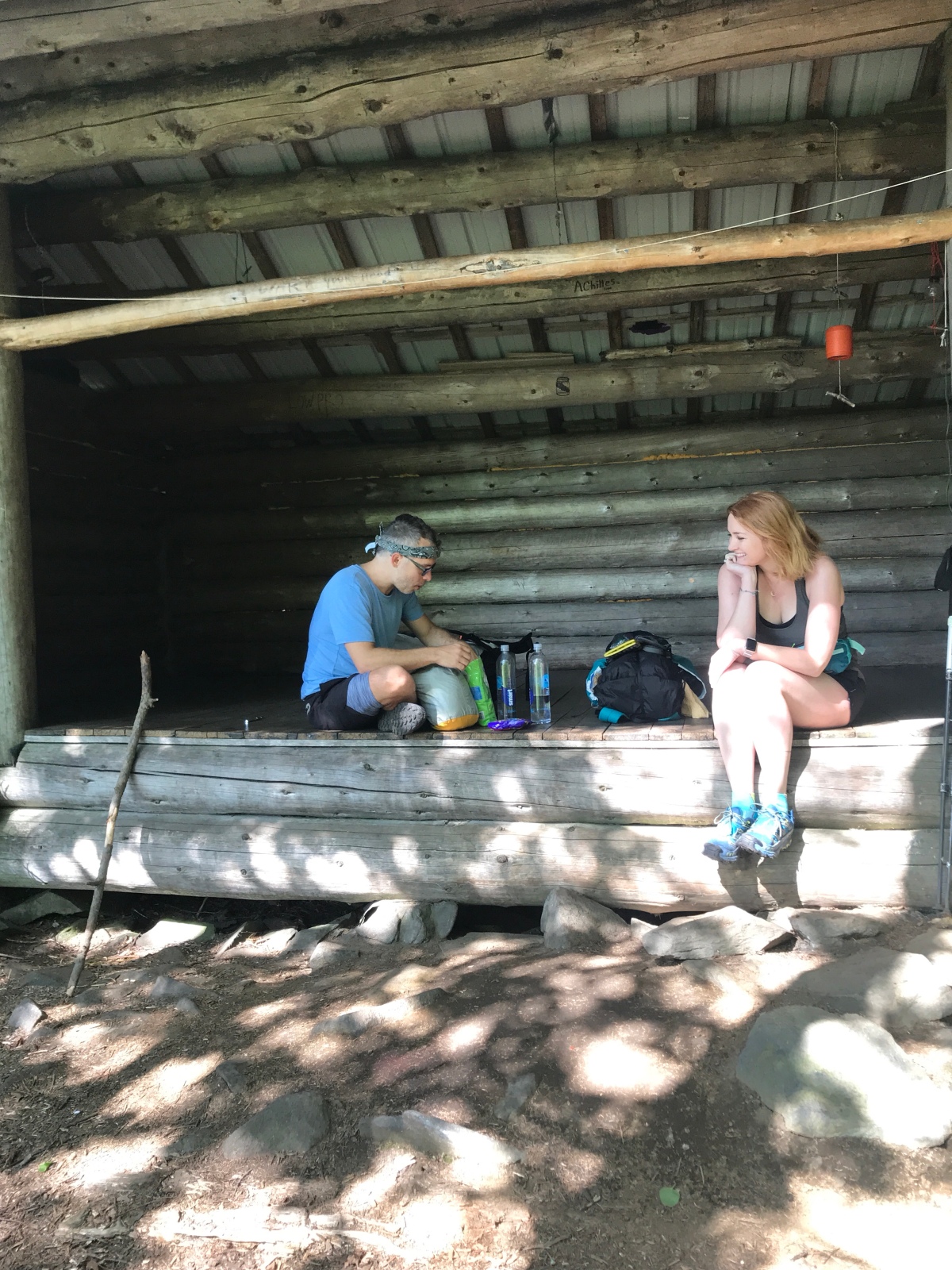 Actually, this is the water. Delicious!

We did stop for a great lunch at a stream with loads of clear, cold water flowing down big rocks. It was some of the best water I’ve had all year.

We crossed a marsh, where I evidently impersonated a Boy Scout.

Another amazing brook, where I washed my face and felt like I’d taken a whole shower. 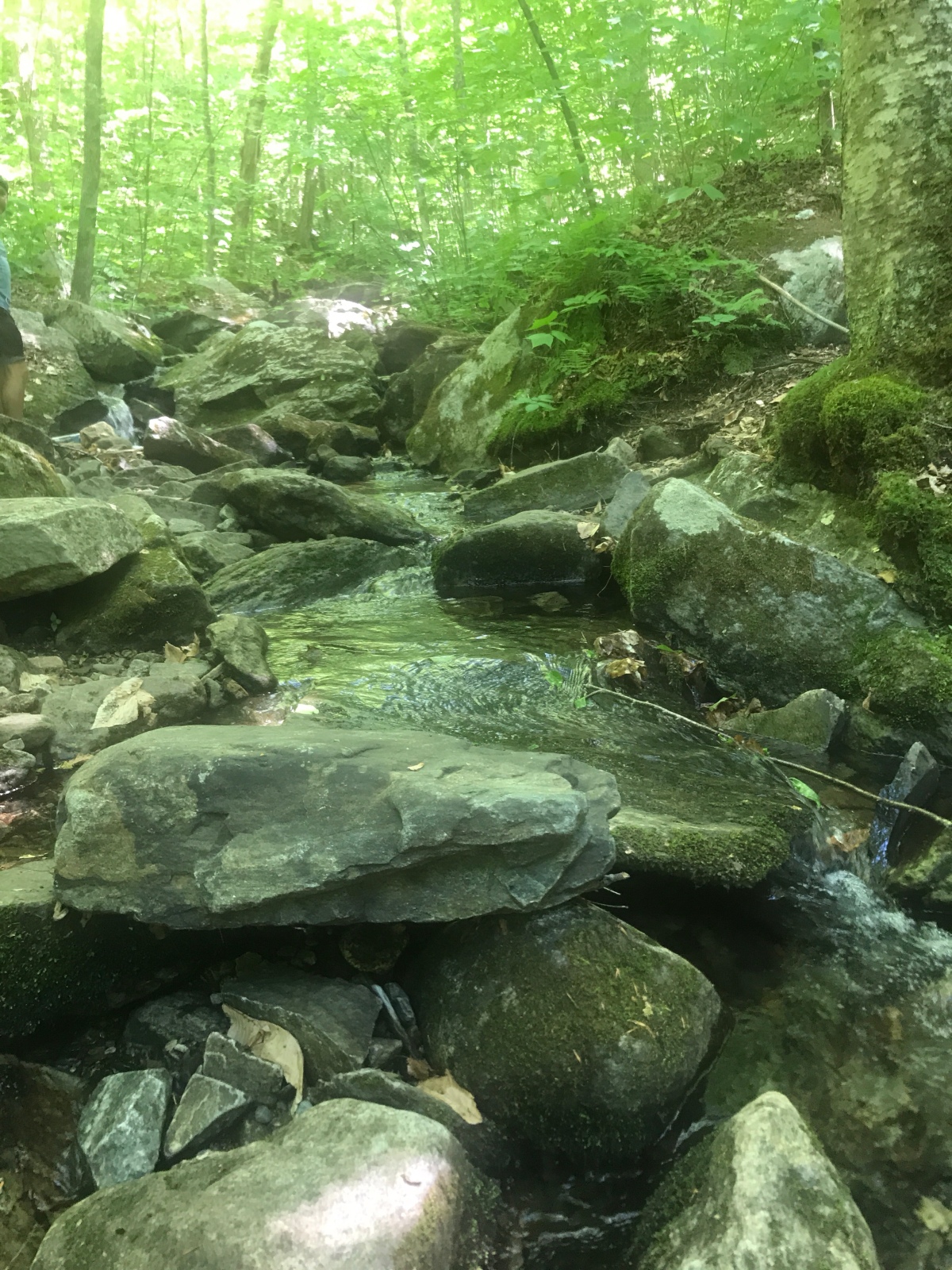 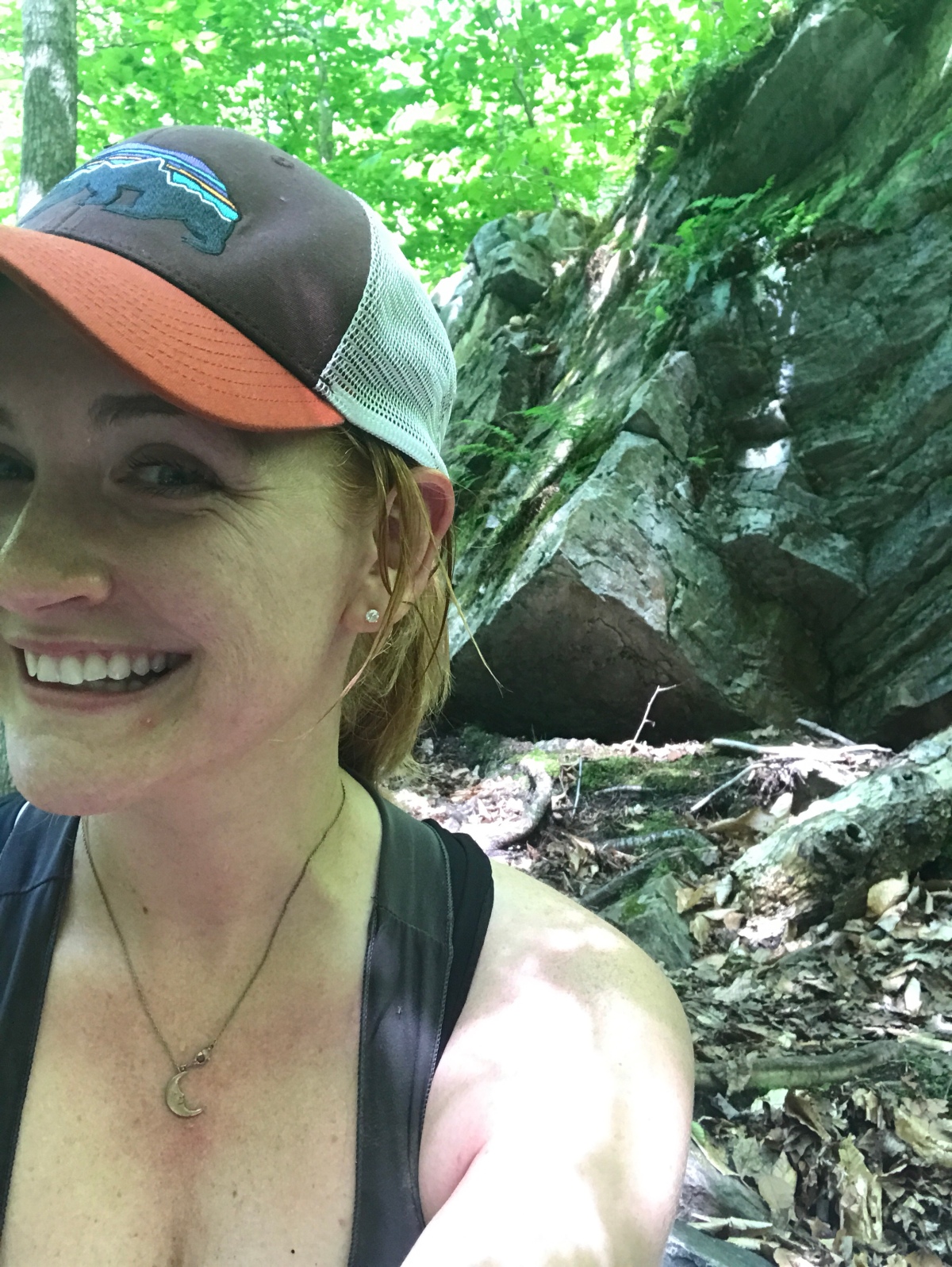 Up to Holt’s ledge, with amazing views. 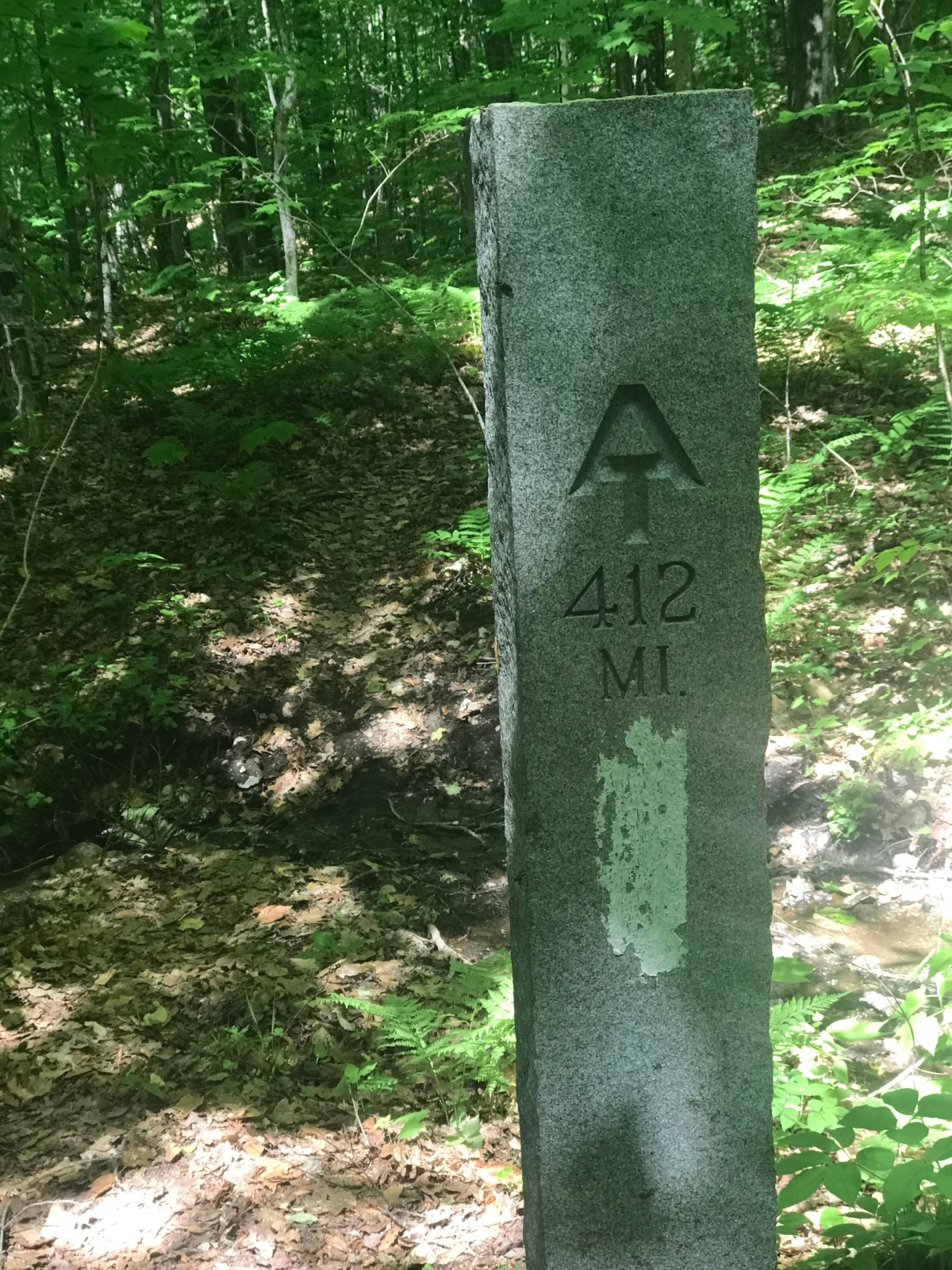 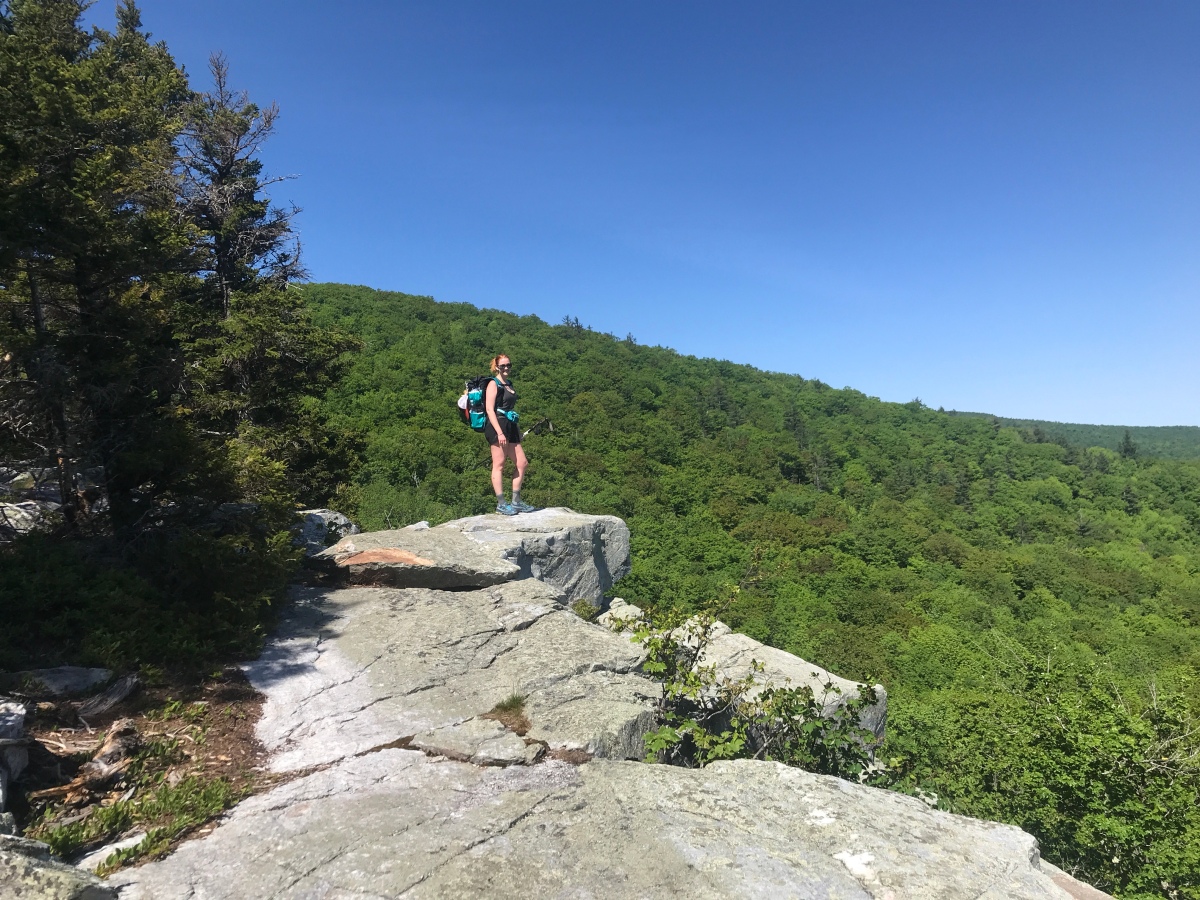 Do you see the firetower in this picture? 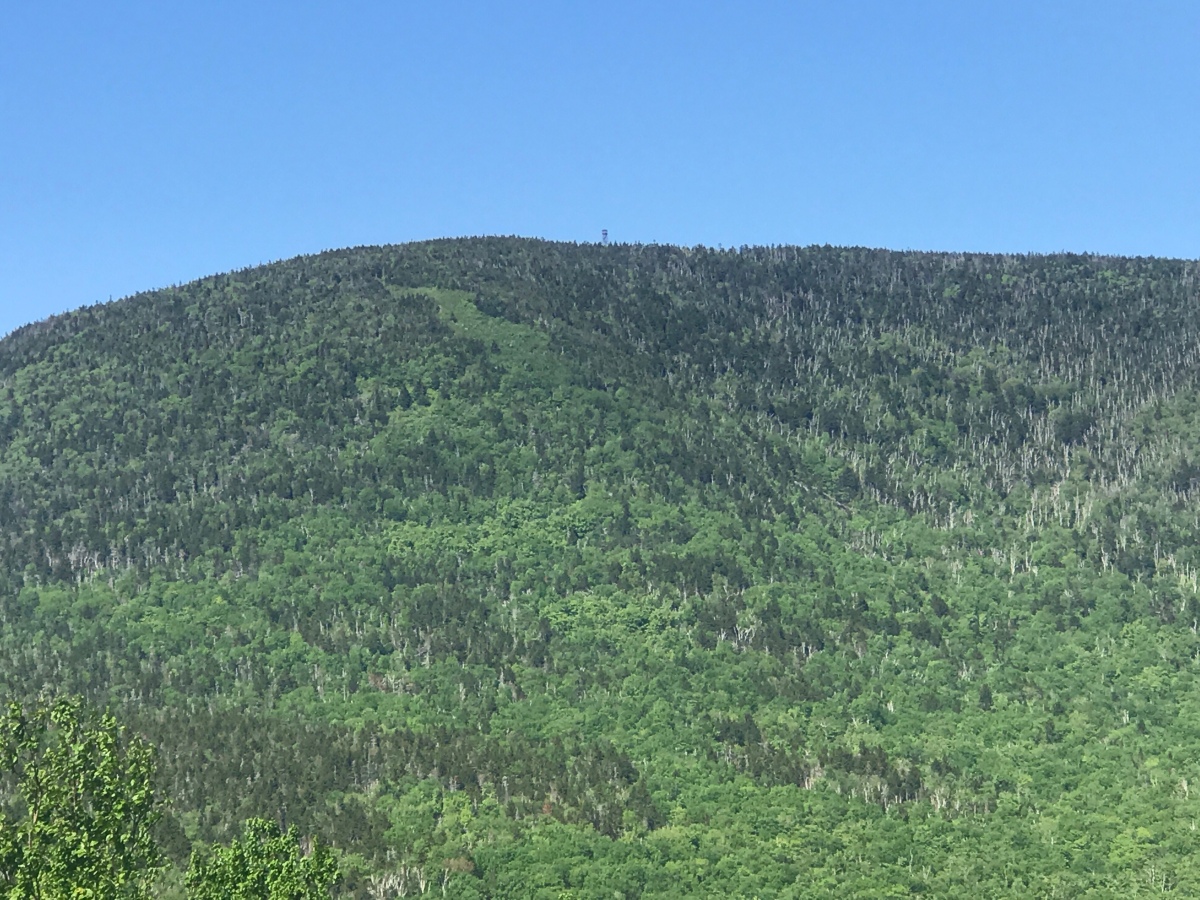 That’s where we were headed. It’s amazing to think that’s only 2 trail miles away. 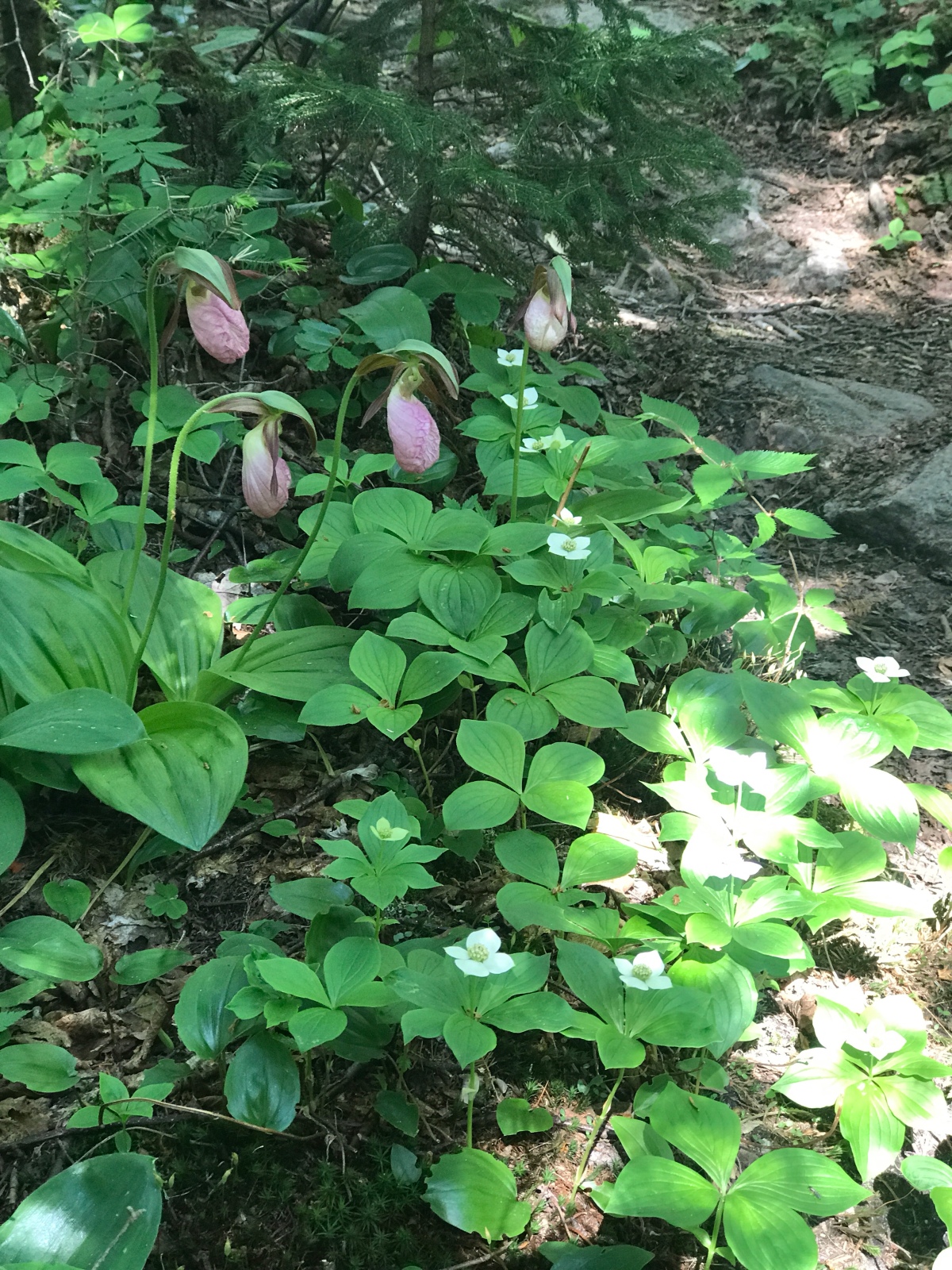 The trail there was…difficult. After the first view (where those pictures were taken), it was .9 to the next view, and then 1.2 to Smarts Mountain. But the last .5 took us 30 minutes. This is partly why:

But we made it, although Bent was suffering and I was out of breath and almost out of water. We went .2 down a side trail but only managed 1/3 of a liter, and that was full of dirt.

We’re tucked up in the cabin with Running Bear, a section hiker. The next 2.5 days are promising constant rain, but we have Mount Moosilauke coming up and that will have to be dealt with…somehow.

We have some plans in mind, but a lot of it is dependent on how well we manage in the most difficult terrain I’ve ever hiked.

LVP: when there wasn’t water.

One of the other settings on my alarm clock is a “wind down” mode with the sound of a gentle rain. So it’s no surprise that, at 6am, when we woke to a muted sunrise and the sound of wind and rain on the cabin roof, we all rolled over and went back to sleep.

We slept for quite a while. Around 10 I ate some cereal and drank the last 3 sips of my water. Around 11 Bent and I finally got up. I’d reworked our agenda, allowing for an extra short day today and a short day at the end, in Gorham. We’d toyed with the idea of going to Grafton Notch, in Maine, but transportation logistics for this section and the next are a lot easier from Gorham, NH. And Bent’s knee is bothering him some (and to be frank, I think yesterday almost killed him! He slept almost the entire time we were in the cabin), so not pushing the miles so much seems like a good decision. It’s better to enjoy yourself than feed your ego, anyways. 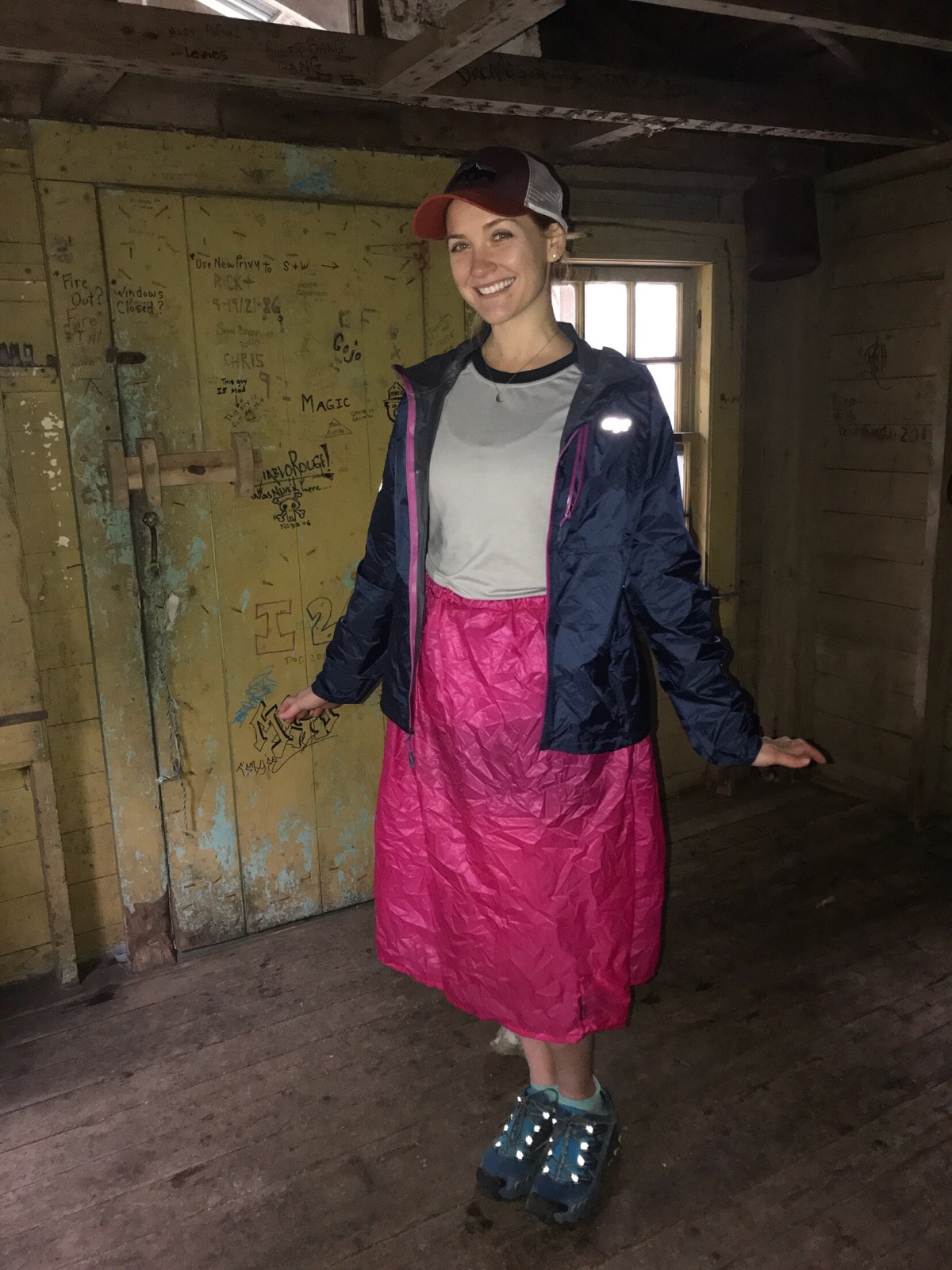 So we had a long 4 miles down Smarts Mountain. The downhill was much easier than the uphill, although we were dodging giant piles of moose poop every 10 steps, on average.

I’m not kidding. We actually counted. 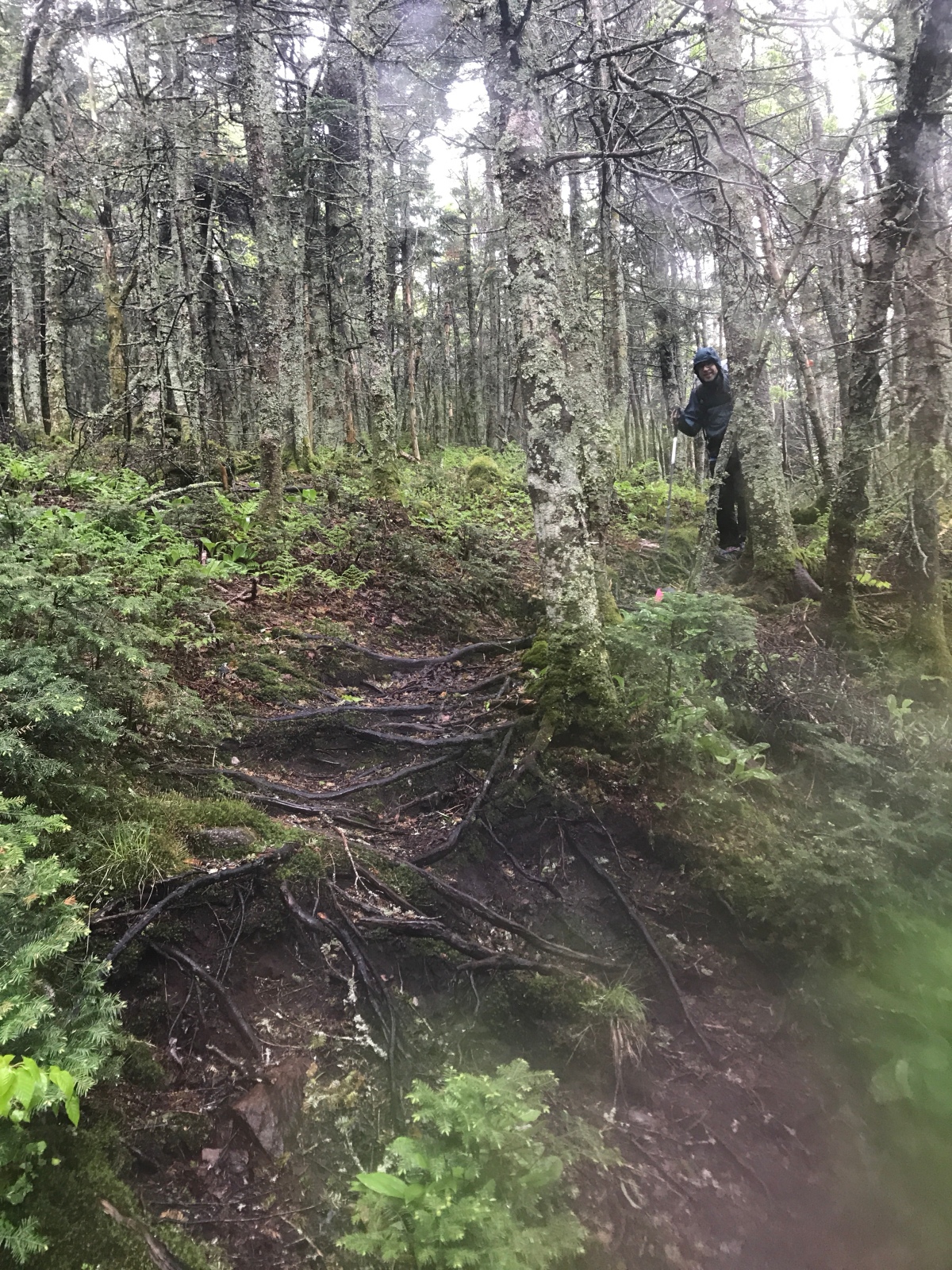 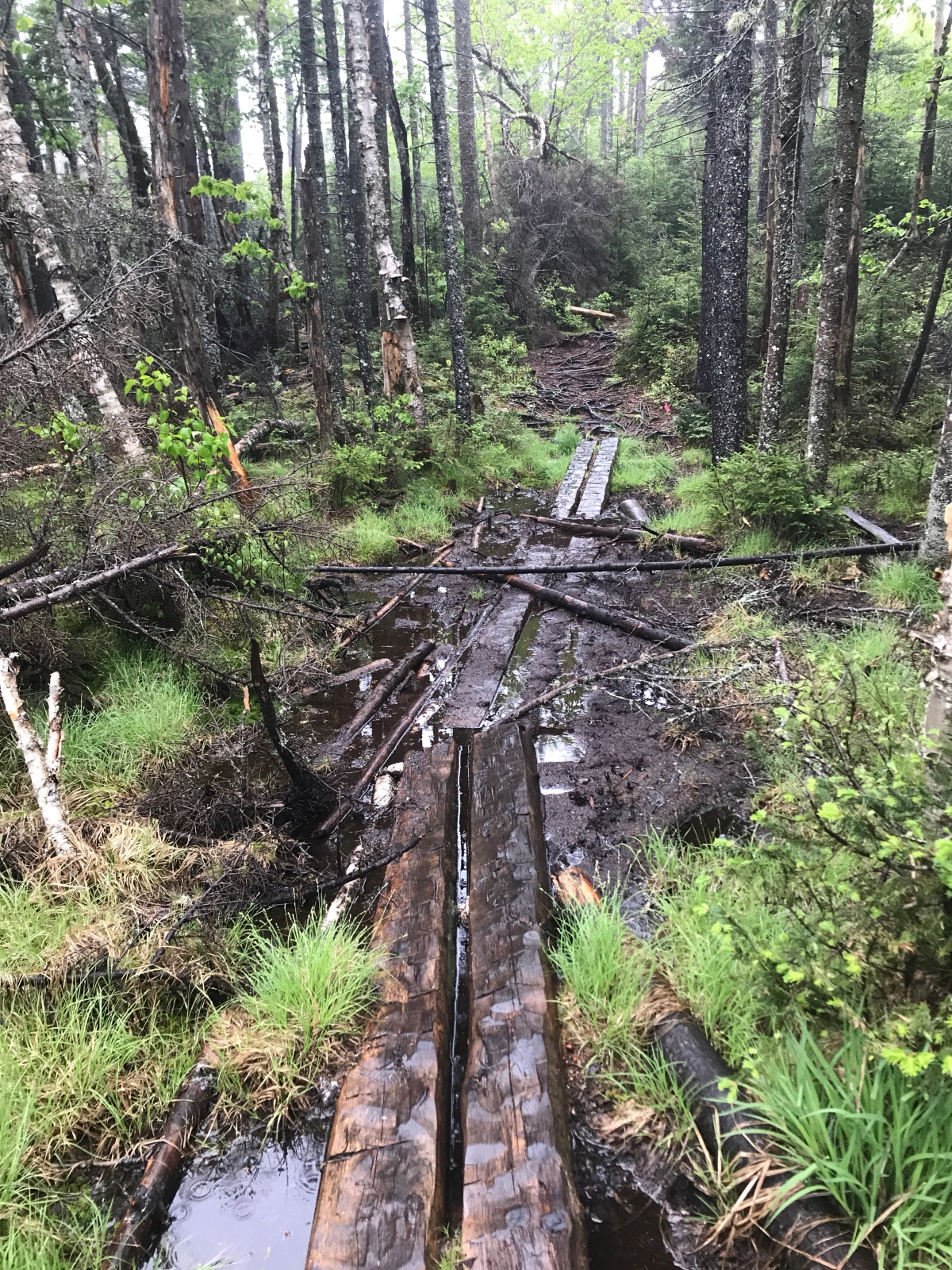 After 4 miles we hit Jacob’s brook and water. LOTS of water. We filled up, ate a slow lunch, and finally brushed our teeth. 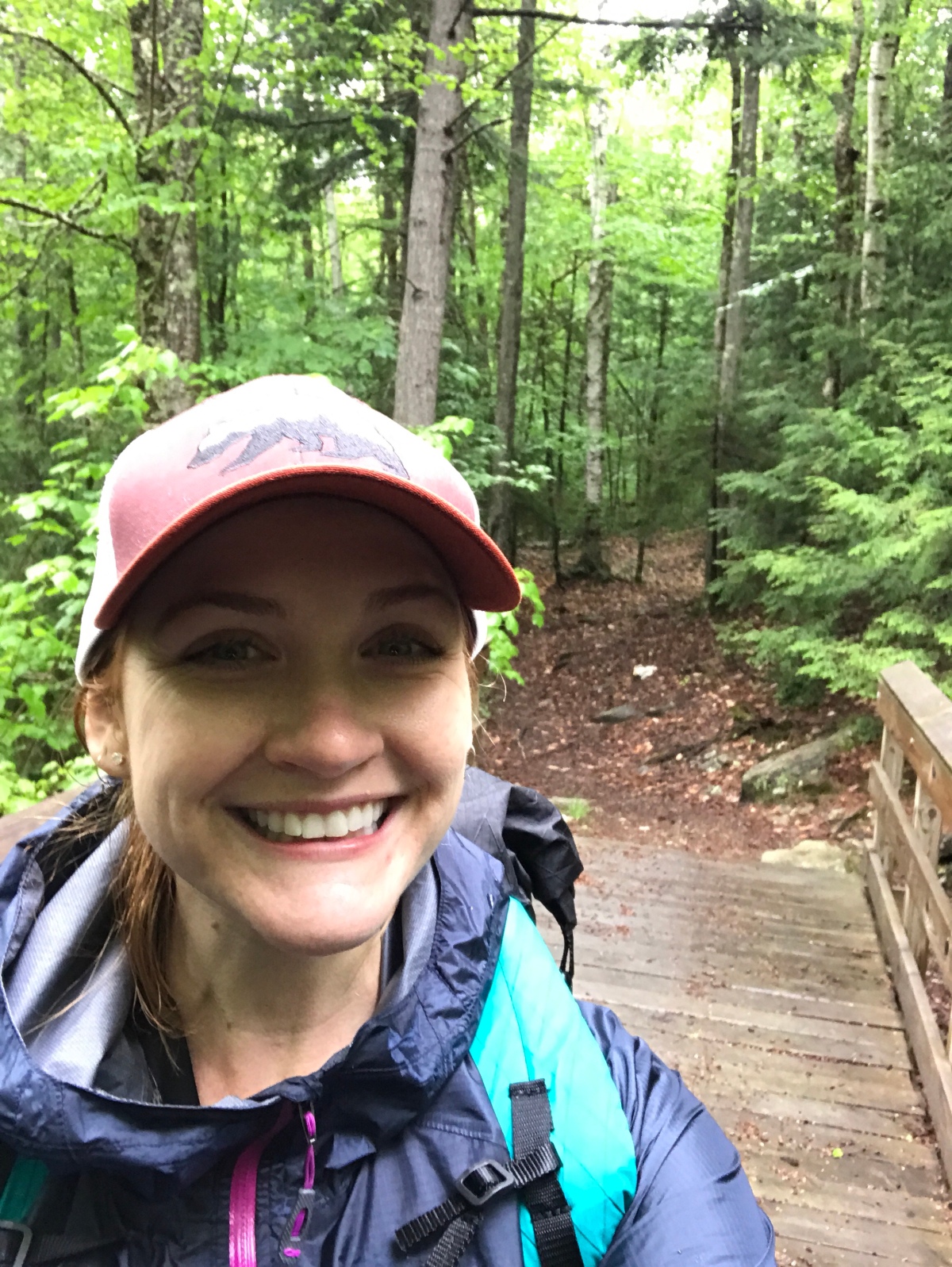 The rain had almost stopped by the time we started up towards Hexacuba and Mount cube (though the rest of Mount Cube will be tomorrow). The quartz rocks were slick and dangerous, so we carefully picked each step. 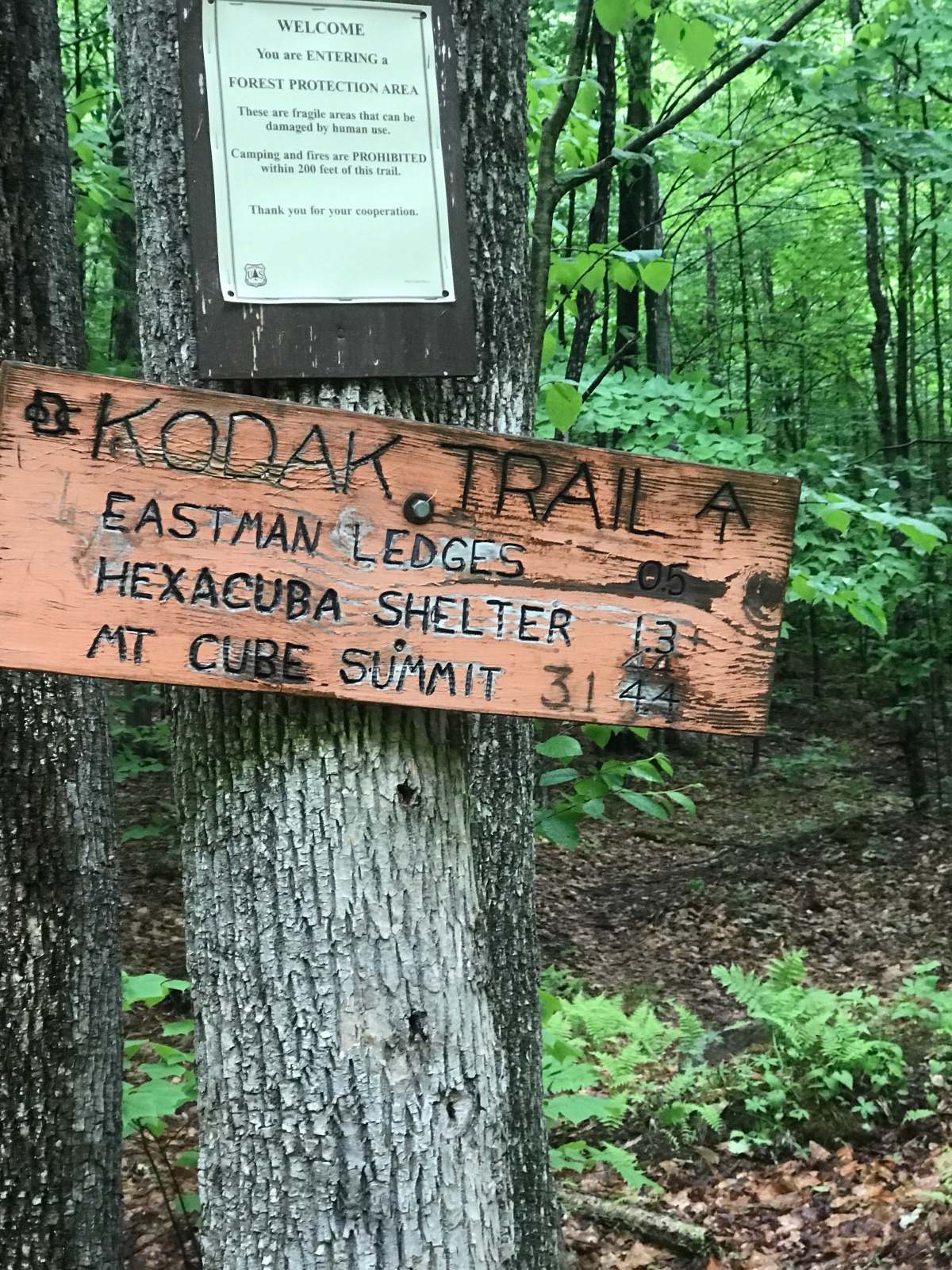 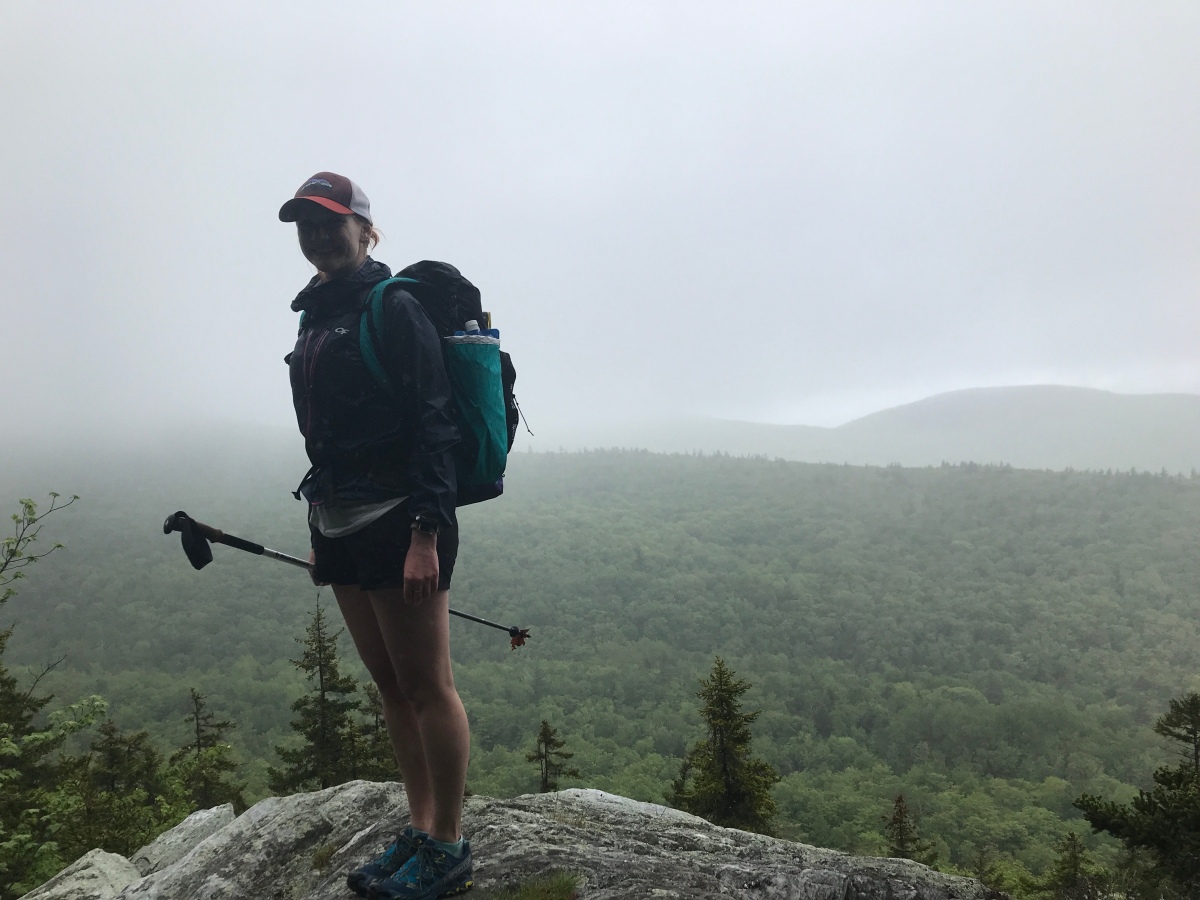 I read this book today about Alex the African grey parrot. The author, his trainer/researcher, talks about how babies use “crib time” to babble new words and practice phoneme combinations. Parrots do the same thing, trying out words in the privacy of their cage, testing combinations. 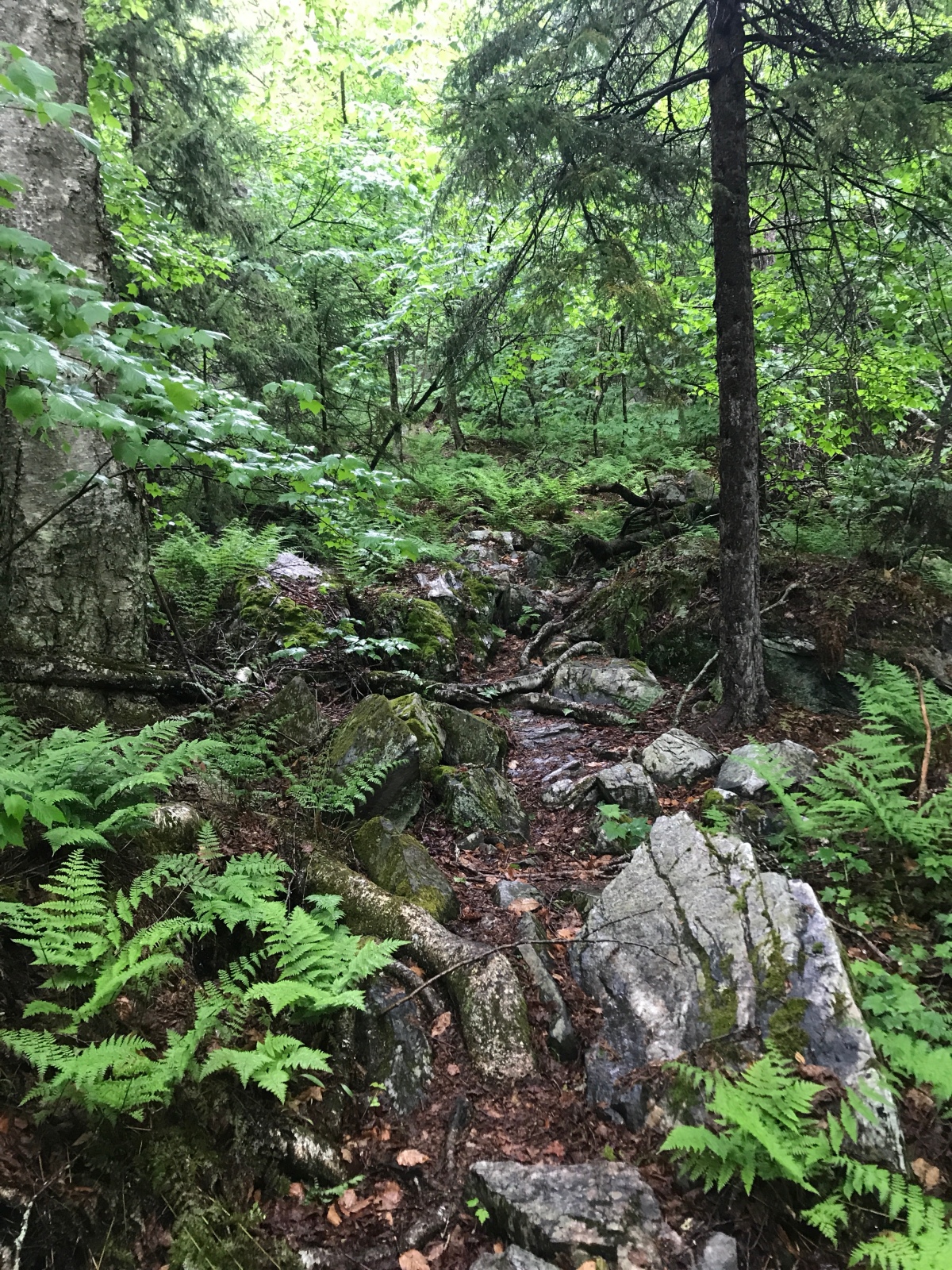 I think hiking gives me that space too. At home I can distract myself from changes. But hiking, around the usual thoughts (“I need to eat some nuts for lunch, they’re too heavy,” “how many liters of water have I had today?” “Is that the top of the mountain? Oh. No.”) is space to test out new thoughts and experiences. “I’m an engineer now.” “We broke up.” “My dad has cancer.” They roll around your brain in different combinations, taking shape and color and meaning. Maybe that’s what other people call “processing.” To me, it feels more like testing out a new word, one I’ve only read, trying to place the emphasis on the right syllable, learning the feel of it.

We came to the shelter and set up, changing in to warm, dry clothes. It was only 3pm, so we were quiet, thinking and taking inventory of pains and twinges and feelings. 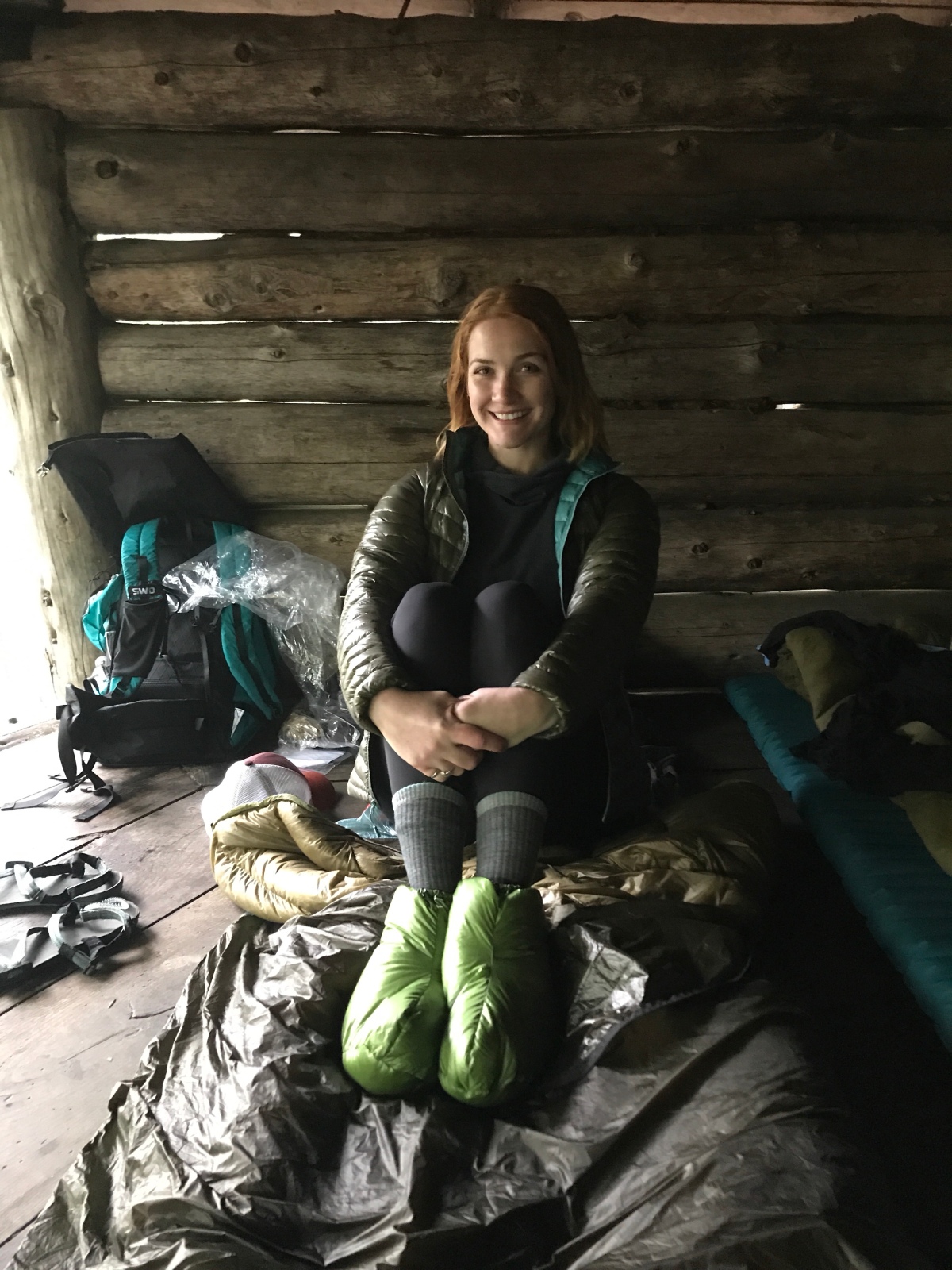 The rain has mostly stopped now, just drops from the trees, and one bird is singing in the forest. Soon we’ll finish our nightly chores (put food somewhere, and that’s really it) and settle in to sleep.

Lest you think everything is a romantic dreamscape, Thoreau at Walden Pond sort of thing, Bent just asked me if I’ve ever eaten aspic and one of the other hikers just farted. Trail life!