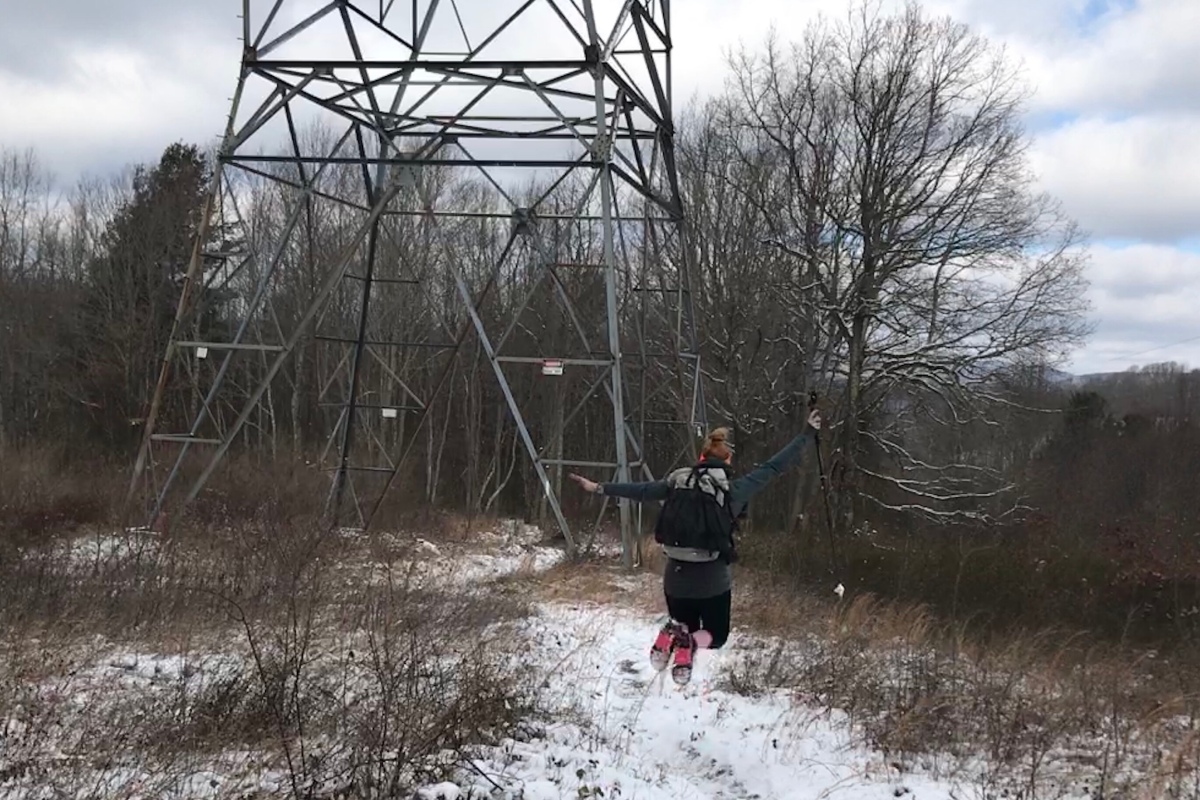 After a blissful day of working from home and reading what is, perhaps, the world’s dumbest book to two classes of elementary kids, I set off for Virginia in my new-to-me little Prius C. It started snowing somewhere around Charlotte, and my speed slowed to a crawl as everyone on the interstate tried to see the lines painted on the road. Well, not a crawl, but the fact is it took me about an hour or two longer than it should have to get to Virginia.

The plan was to park at I-77, mile 590.5, and do an out and back to VA-623. I didn’t want to bother with a shuttle because 623 is a super scary mountain road, and I knew we’d be getting snow. It just didn’t seem like a great idea to try to drive down that road in snow.

So I arrived at the I-77 trailhead in the dark. I parked at the parking area about a mile and a half away from where I needed to start walking, since it was off a side road and much quieter. I had intended to tent, but in the dark and the small snow flurries, I just didn’t feel like trying to find somewhere flat. I moved my milk crate of PPE for work into the front seat, laid down the back seat, and curled up in the trunk area of my little hatchback.

I was chilling out on my phone, playing a little candy crush before bed, when I heard NOISES. First came the “ca-CLUNK.” I laid still, turning the screen off on my phone, listening for anything else. Nothing. I peeked out the window and saw nothing in the flashing yellow lights of the “BRIDGE OUT” sign next to my car. I laid back down, scrolling through twitter. As I was about to drift off to sleep, eyes heavy after reading through a writer’s 10-step Korean skin care system, I heard another noise. It sounded like a largeish animal skittering on top of, or perhaps under, my car. I stilled, listening for anything else. Nothing. I googled “Prius C makes noises when off.” After scrolling through a few Prius forums (why are there so many?) I was reassured that my car just makes noises. I went to sleep.

I woke up in the dark to snow falling all around. I convinced myself to get up, make coffee, eat breakfast, etc. It was cold, but not outrageously cold. I had slept pretty well. While I sipped on my coffee (a delightful blend of Starbucks Instant Vanilla Latte and hot chocolate with marshmallows, so….barely coffee), I consulted the map. A 1.5 mile roadwalk that I’d already done, and then 16.2 miles to VA-623. It looked mostly flat, except for a few climbs under 500 ft and one big one, at around 1500 feet over three miles. Nothing tooooooooo terrible. But I knew I didn’t want to do the dumb 1.5 mile roadwalk again. I’d already done that, and I didn’t want to do it in the dark and snow. I drove up to Bushy Mountain Outfitters and asked if I could park there. A woman told me where to leave my car, and I was on trail by the time the sun was barely lightening up the sky. 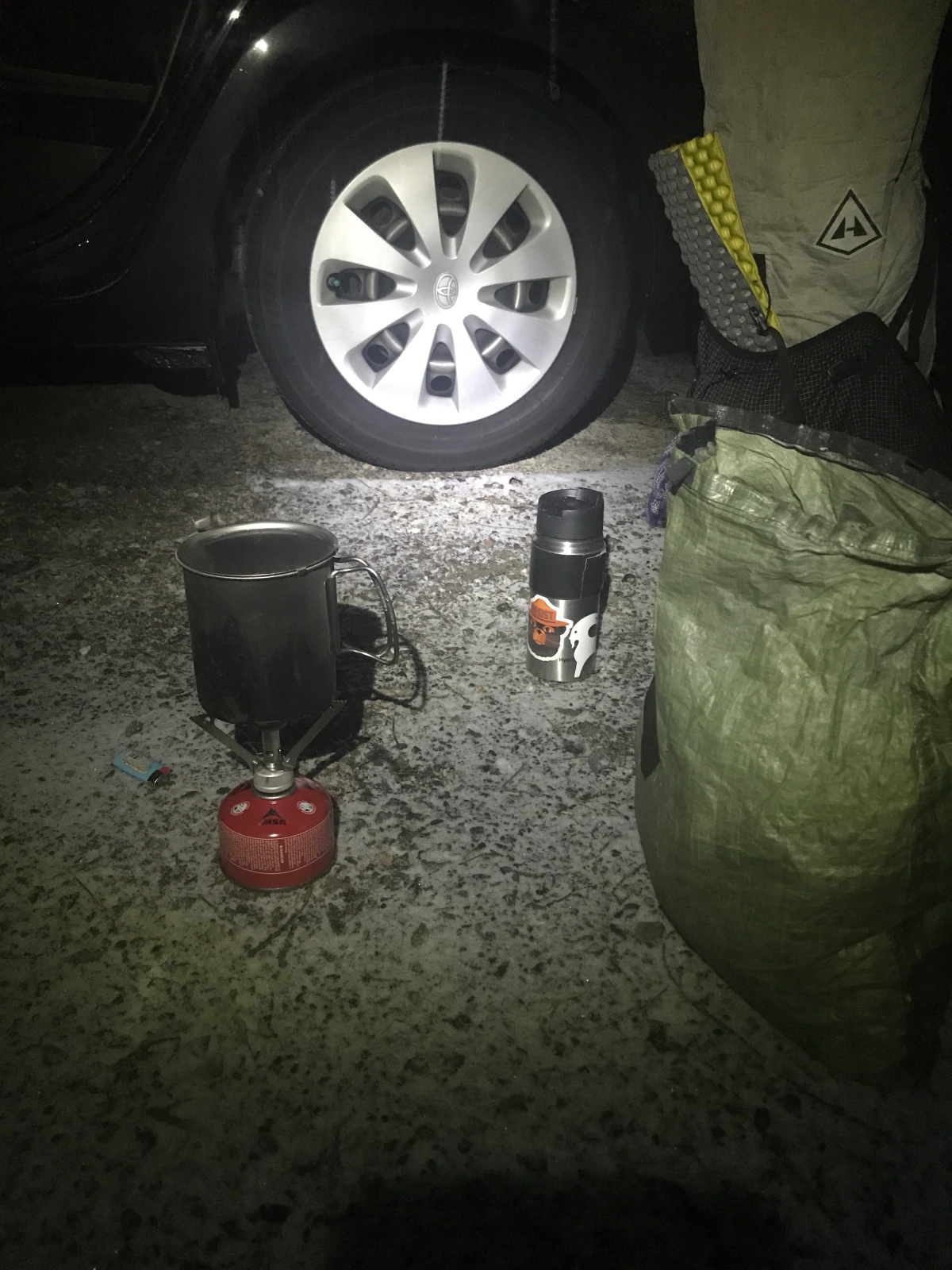 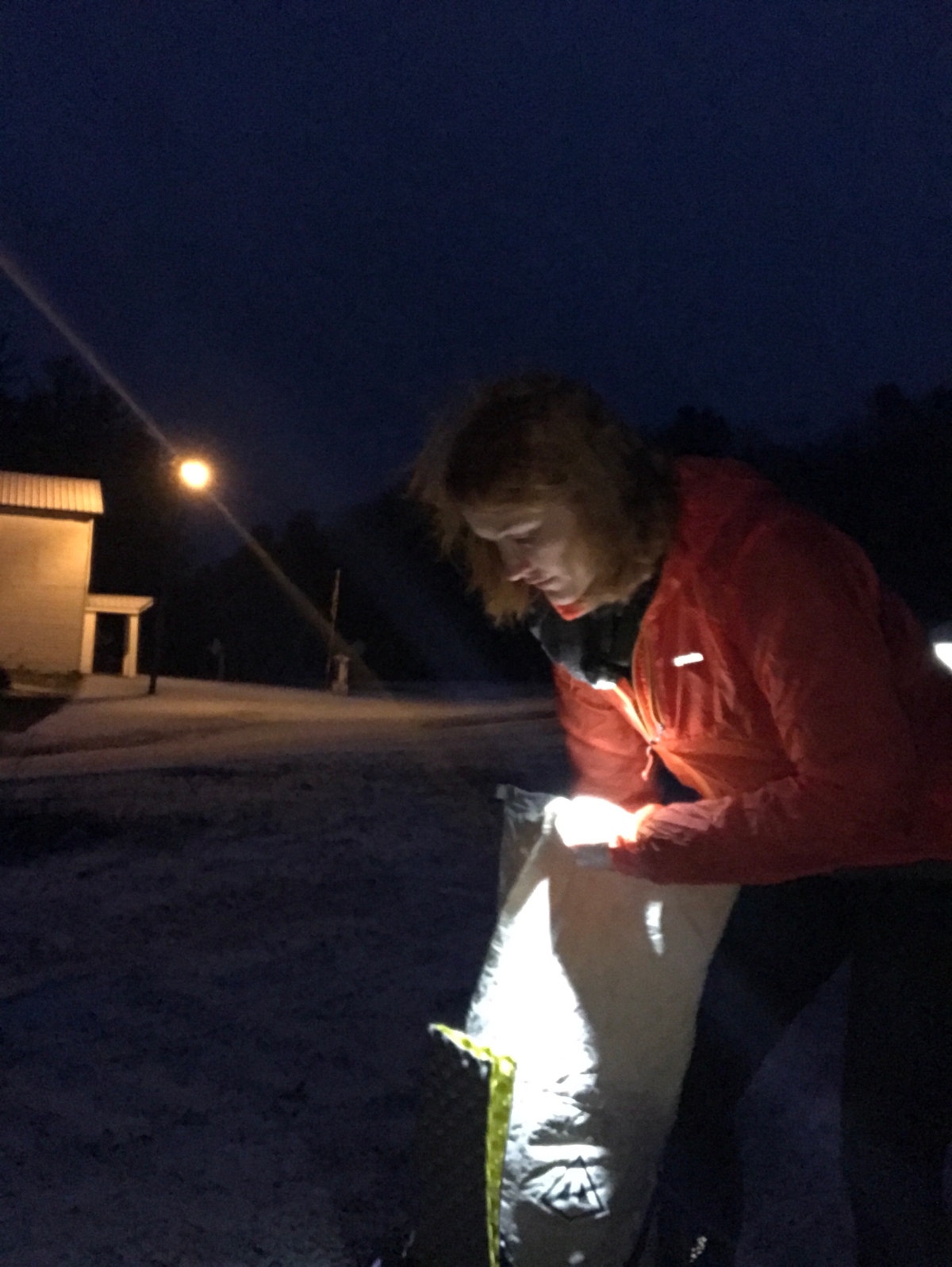 The first bit of the walk was actually up a gravel access road for a bunch of power lines. That was a very pleasant walk! I was warm, still sipping my “coffee,” and it was nice to just stroll along the road. The trail went into the woods after a bit, though, and it was still a nice, mostly flat walk. The snow kept falling, and I was happy. 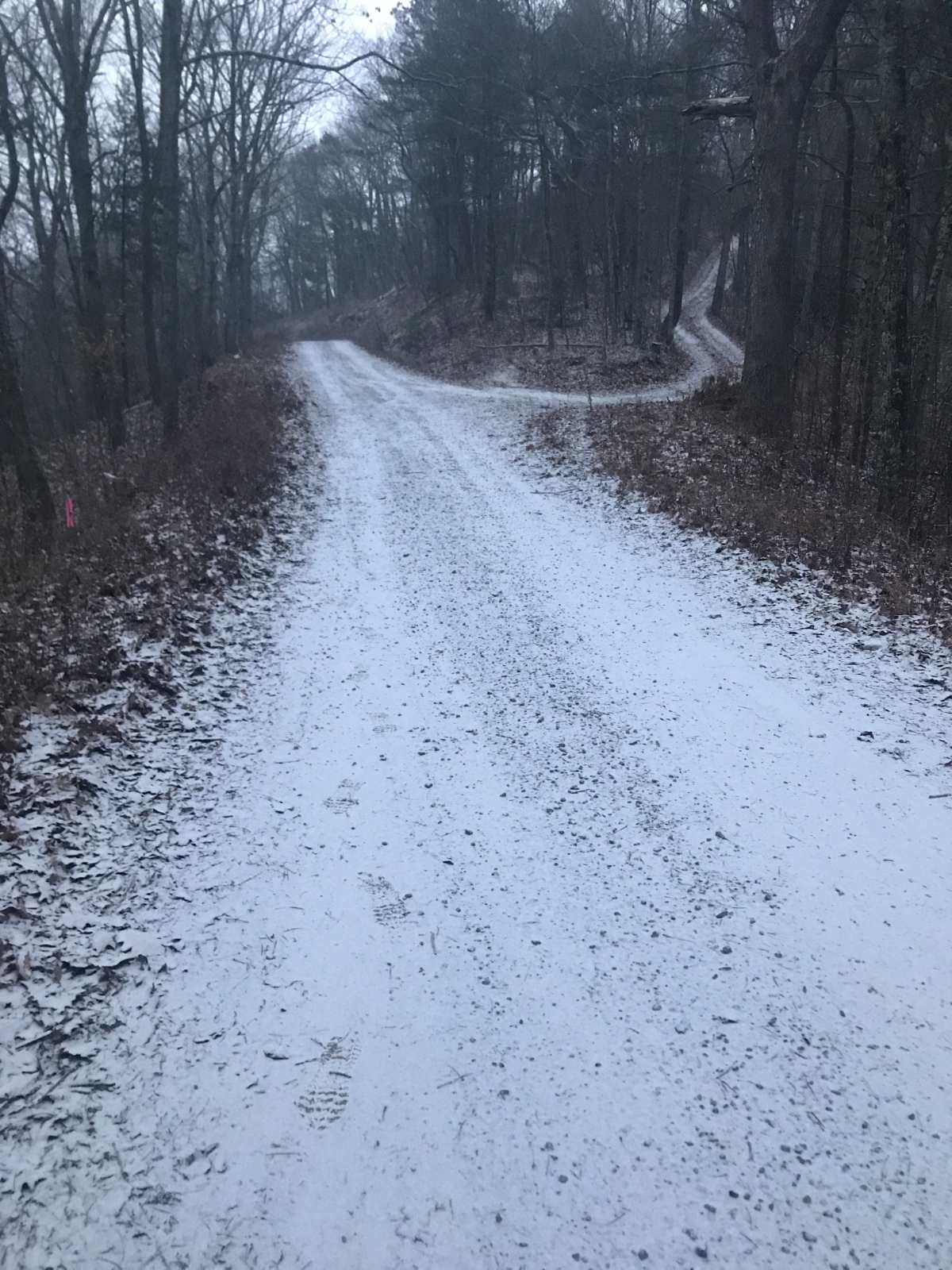 I didn’t get any good views, mostly because it was a foggy, snowy morning, but that was ok. I love the snow. 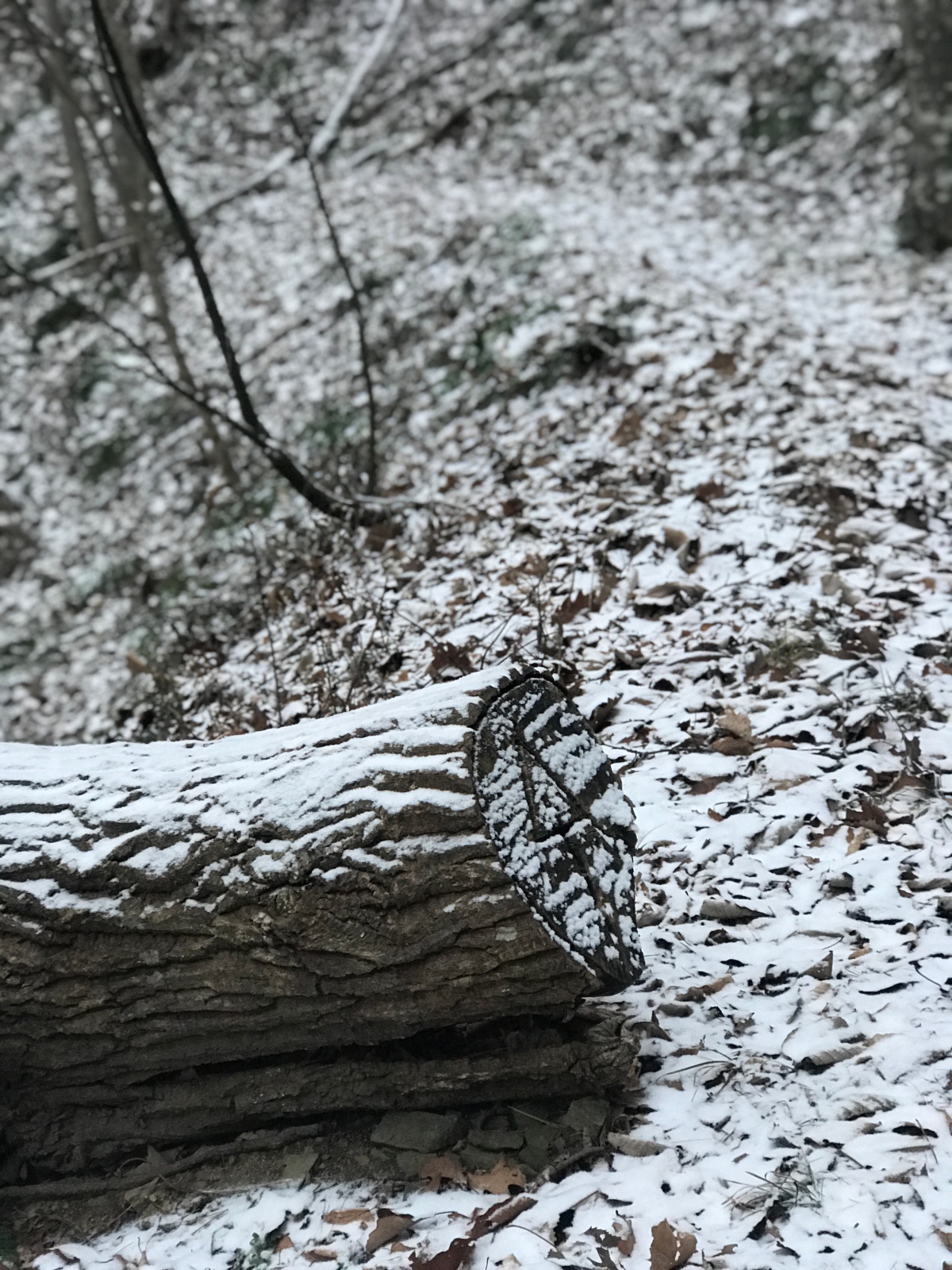 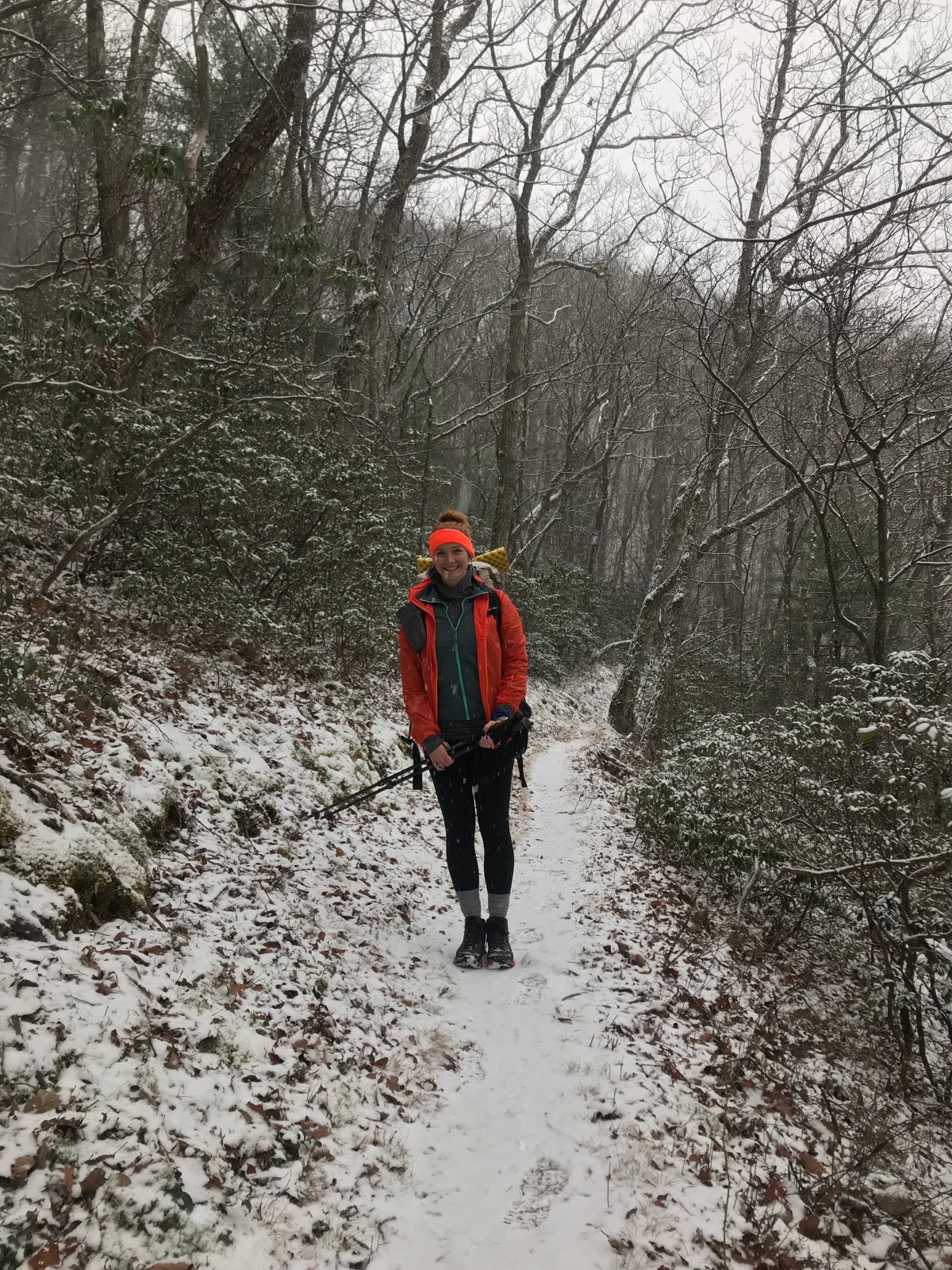 I cruised along, really loving this section of trail. Not a lot of water, but enough.

I stopped for a break at Jenkins Shelter. There was a creek about .1 or so before the shelter, and there was an odd tent there. I didn’t see anyone around, and it’s kind of unusual to set up camp at like 12:30pm, so it was just weird. The shelter itself was musty and had some blankets and stuff left by some weekenders. There was also a lot of evidence of a very active bear – the wooden bridge across the creek was absolutely destroyed with scratching. A poster at the shelter confirmed my suspicions. This shelter was not a great option for a place to stay tonight. But it would do fine for a lunch break.

I took off my shoes and socks to let me feet dry out some. This weekend, I’d opted to switch to a pair of Hoka One One Mids. These boot-ish trail runners have a nice compromise on footbox space (not as roomy as my Altras, but still nice), are still zero drop (which I don’t honestly know how sold I am on this now!), and have good traction. I’d considered switching to an old pair of Salomon Speedcross that I had, but the tread was going on those and I really needed a size up for backpacking. So I went with the Hokas, and I was glad I had. The got a little tight after 10 miles or so, but with some more hiking in them I think they’d be great. They’re also my first pair of waterproof shoes, and in the snow, I was glad I had them. I wished I’d brought my gaiters too, but oh well. It worked out well enough, except for some sweaty, damp socks and feet that needed a break. 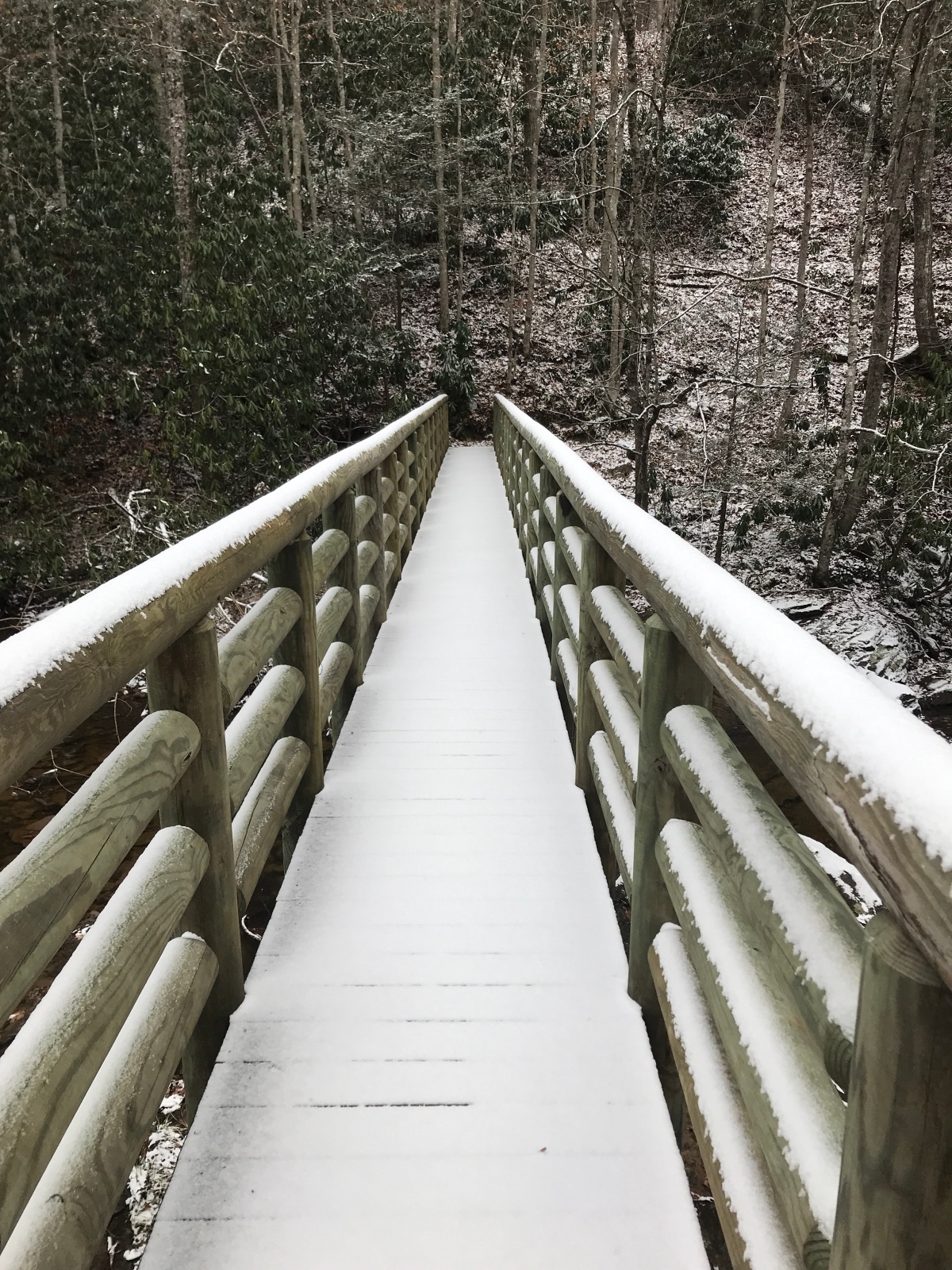 While everything dried out, I ate some food and tried to drink some water and took my hair down out of the high bun I’d had it in. Lol, that was a look for sure.

I left the shelter after 30 minutes or so, and set out for my last big climb of the south-bound section. It was…rough. Most of the day I felt great! I didn’t feel as fat and slow as I had on my last trip…but when I got to this climb, I was just kind of done. It was a slog. I made it up to the top, tried to scout out my last possible campsite (Davis Path Campsite, down a very steep, apparently not frequently used or maintained side trail, about .4 miles) with water. I wasn’t too keen on going down that side trail, but I didn’t have any other options for water between there and Jenkins shelter. 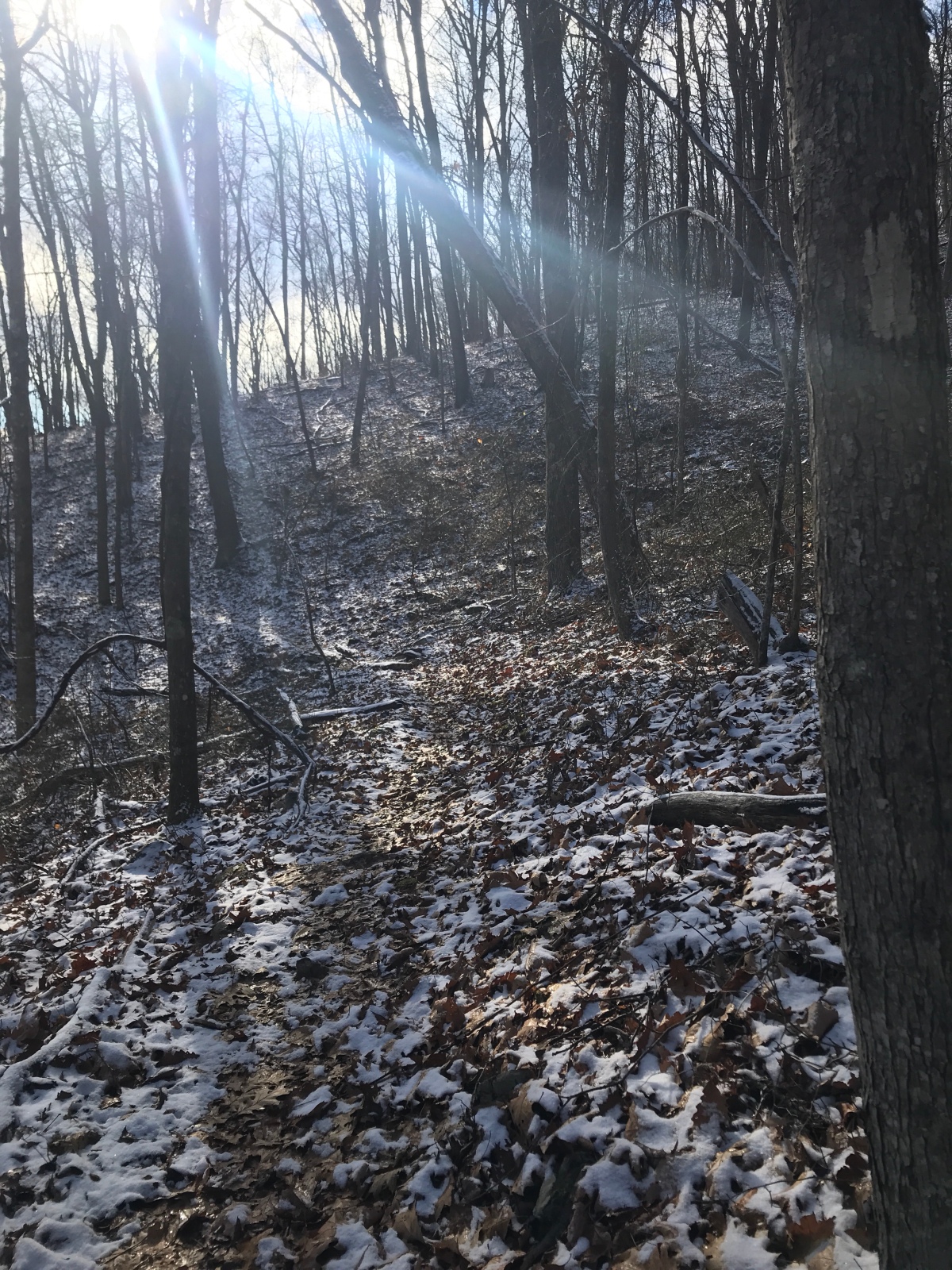 The last mile was fairly flat, so I picked up my pace again. There were two hikers a few hours (maybe 6 hours? Judging by the snow in their footprints) ahead of me. I tried to guess what kind of shoes they had on. One I recognized the lug pattern of Salomons. The other remained a mystery. 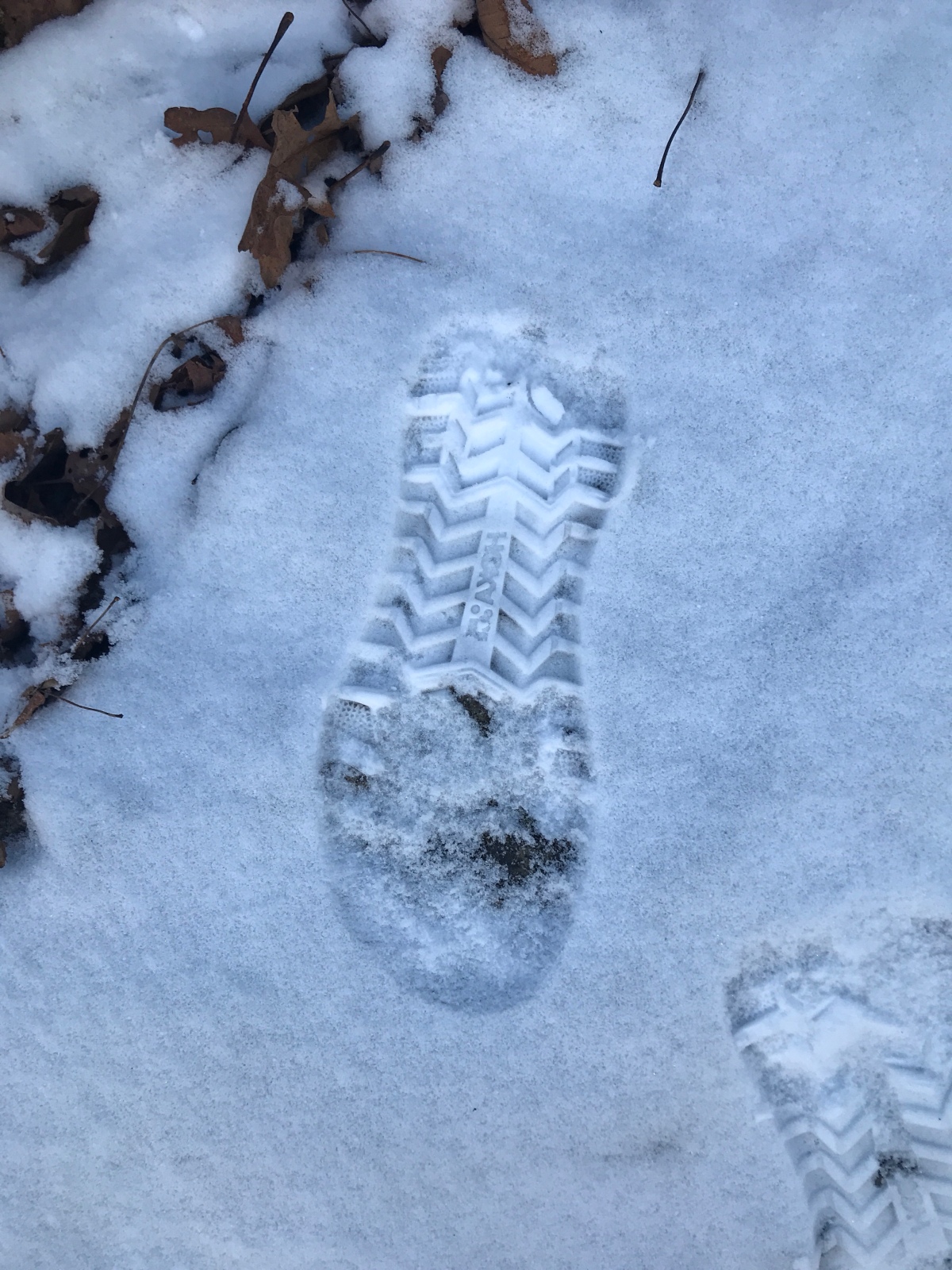 I made it to VA-623. A bunch of hunters sat in their truck. I chatted with them briefly (no, I hadn’t seen any deer) and had a quick handful of chocolate and some water. I asked where they were headed to. Could I maybe hitch a ride with them back to my car? But it turns out they weren’t going my direction, so I started to walk back.

I pulled up guthooks, remembering that there was a hostel just down the mountain. I called and asked if they could shuttle me to my car. If I could get to my car tonight, I could drive down to the little schoolhouse in Atkins and do an out and back in the morning and be completely done with Virginia. 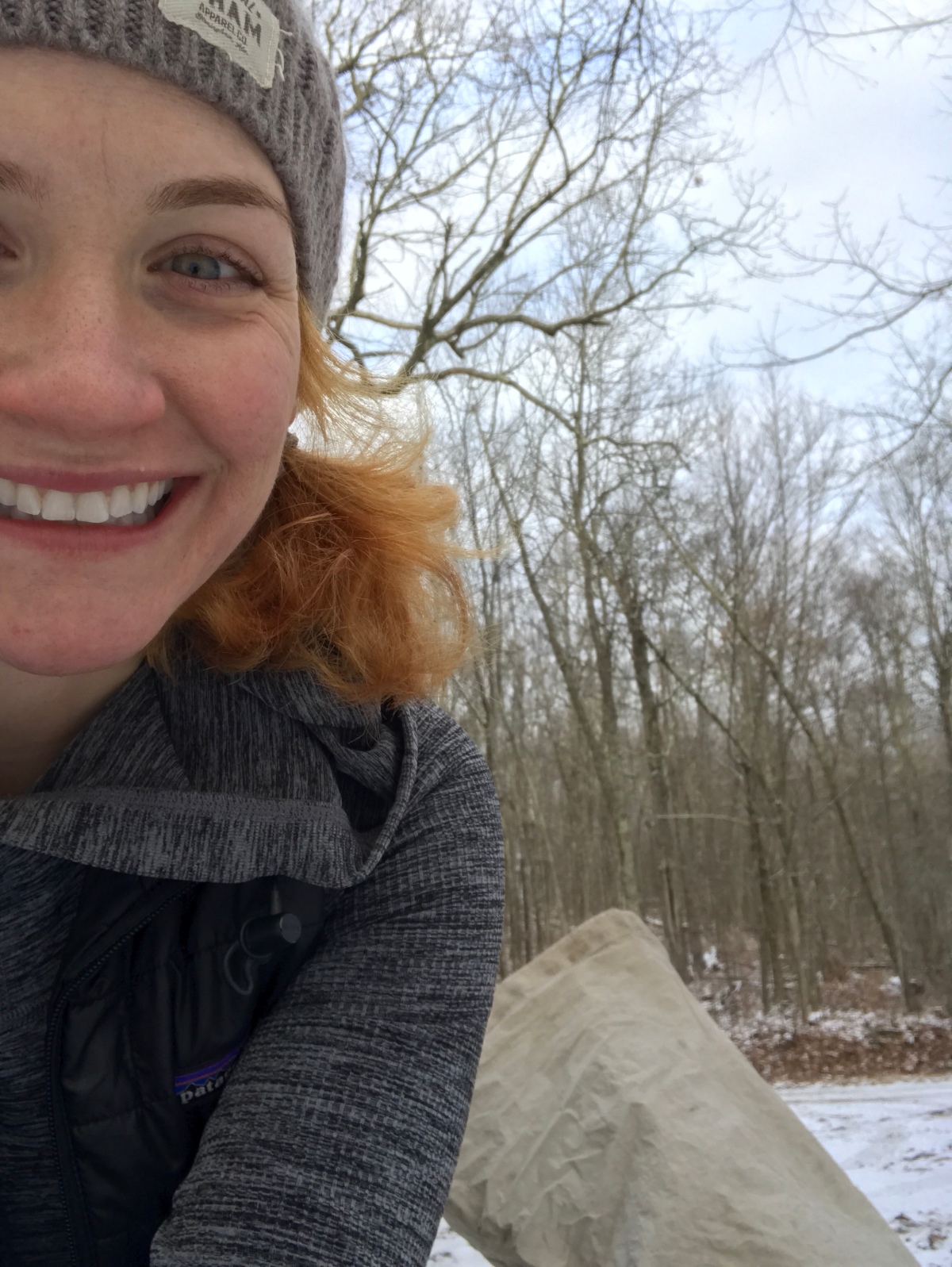 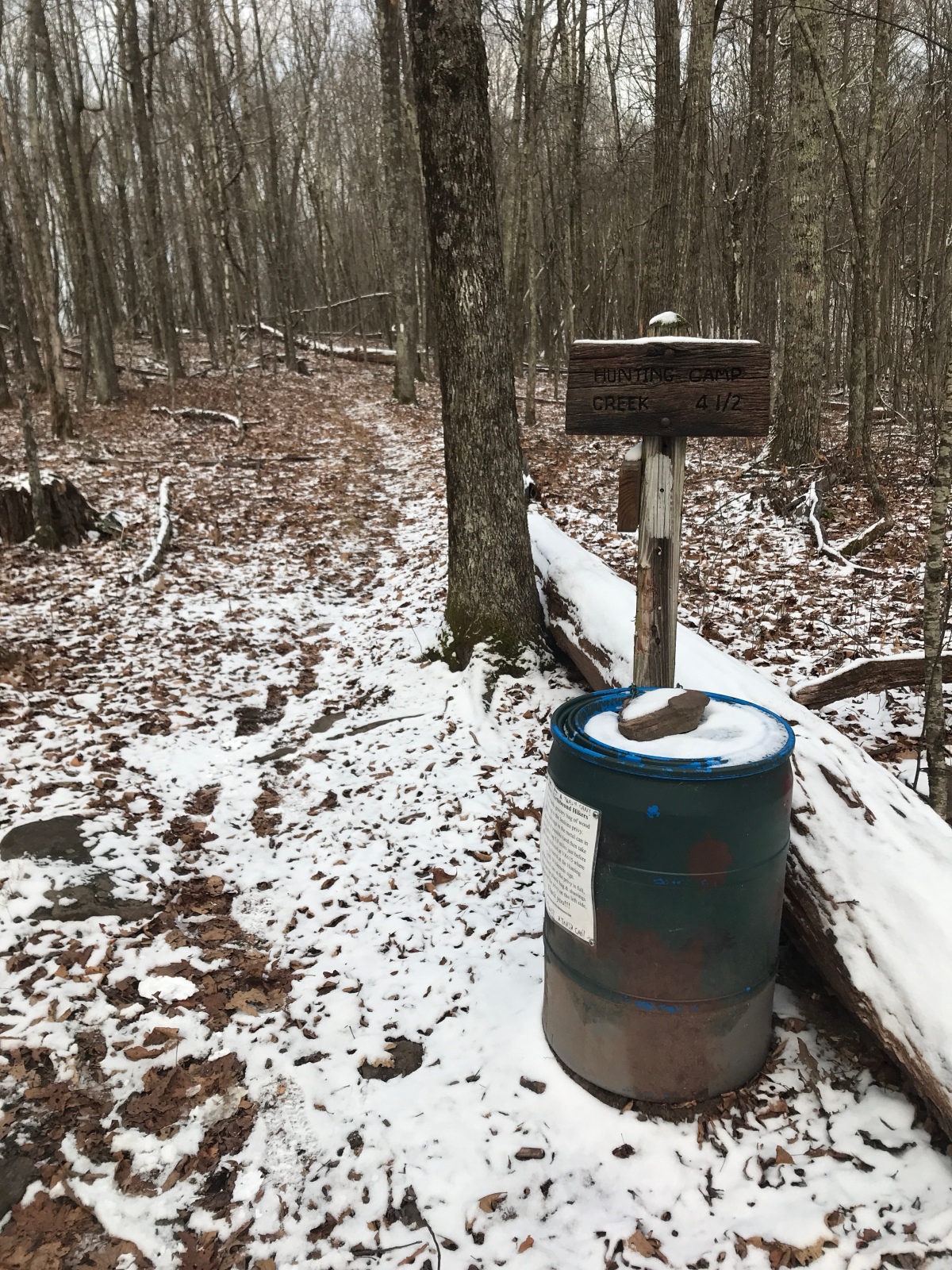 The hostel said yes, and they came to pick me up. As it turns out, I had to wait a few hours for the right car to get back to the hostel (?? Honestly it was all kind of weird) so I warmed up and played with a bunch of dogs and a kitten while we watched a movie.

I got my ride back to my car, paid my very expensive shuttle, and headed off to Atkins, very well pleased with my plan. 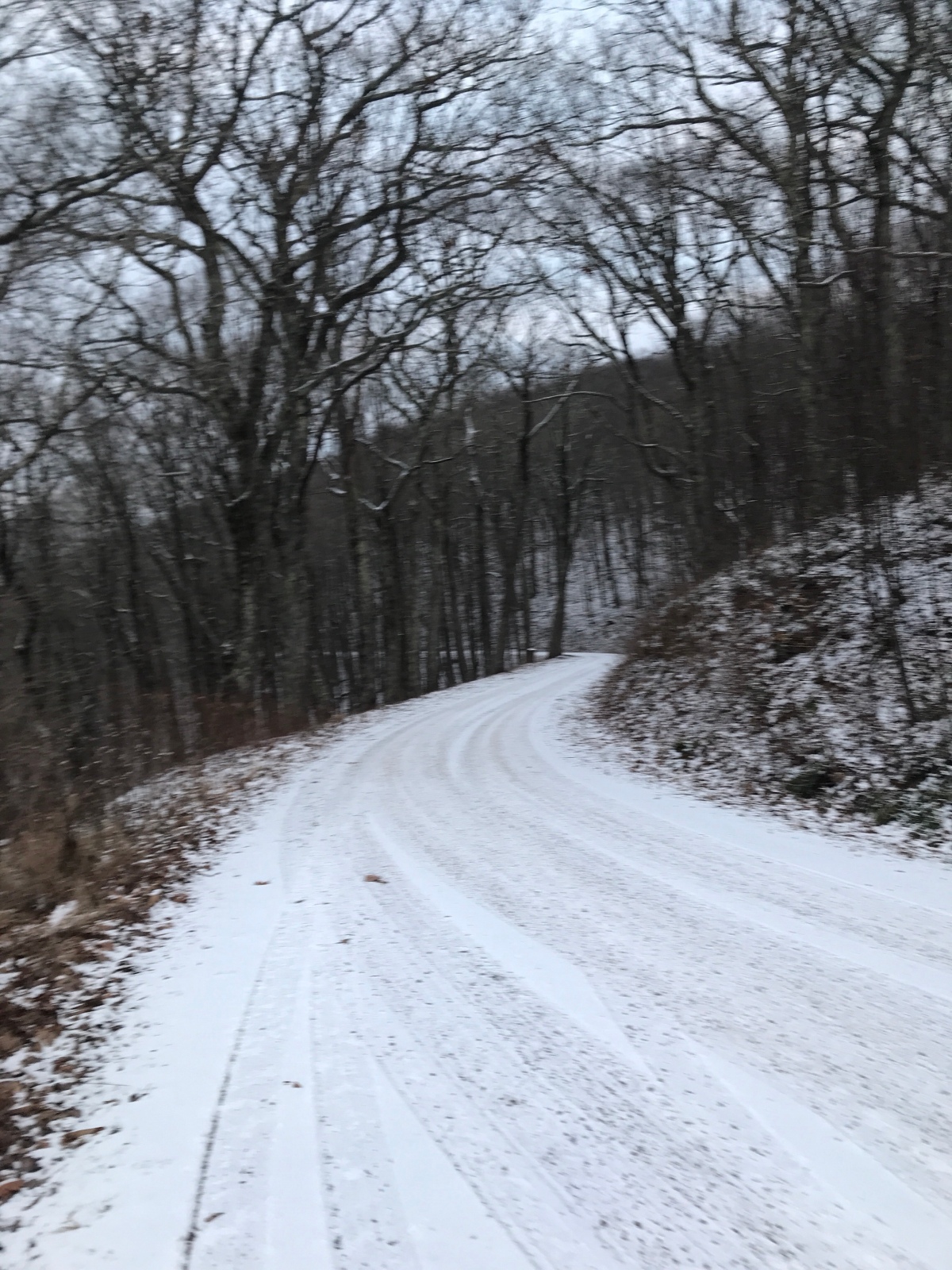 Another night sleeping in my car, toasty warm despite the cold night outside. And I woke up to even MORE snow! I got dressed for my hike, only taking a few extra layers, water, and food. This meant no tent, no sleeping bag, no extra weight. My pack felt like a daypack! I left off my hipbelt and chest strap, just carrying the weight like a normal backpack. It felt fantastic.

The walk was beautiful and peaceful and mostly very easy.

Before I knew it, I was at Chatfield. Almost a year ago (sometime in February, I think), I had parked up at Partnership Shelter and night-hiked the 6 or so miles to Chatfield shelter, trying to meet up with Sartec, my boyfriend at the time. I had found him and his friend Butcher at Chatfield, and the next day we’d hiked back to Partnership. And of course, the last time I hiked to the 1800s schoolhouse, I’d ended up leaving at 2am after getting freaked out by a weird truck, so I never did the last 1.5 miles. It was kind of emotional, being back at Chatfield, but also I was just…hungry, and annoyed at the bag of trash someone had left.

I made my “coffee” and had some breakfast, enjoying the moment and the snow and the cold air.

I walked back, sipping my hot drink and listening to Justin Beiber’s Christmas album. I used only one pole, and mostly to give that hand something to do. My light pack, the easy trail, it was all just a pleasant stroll. 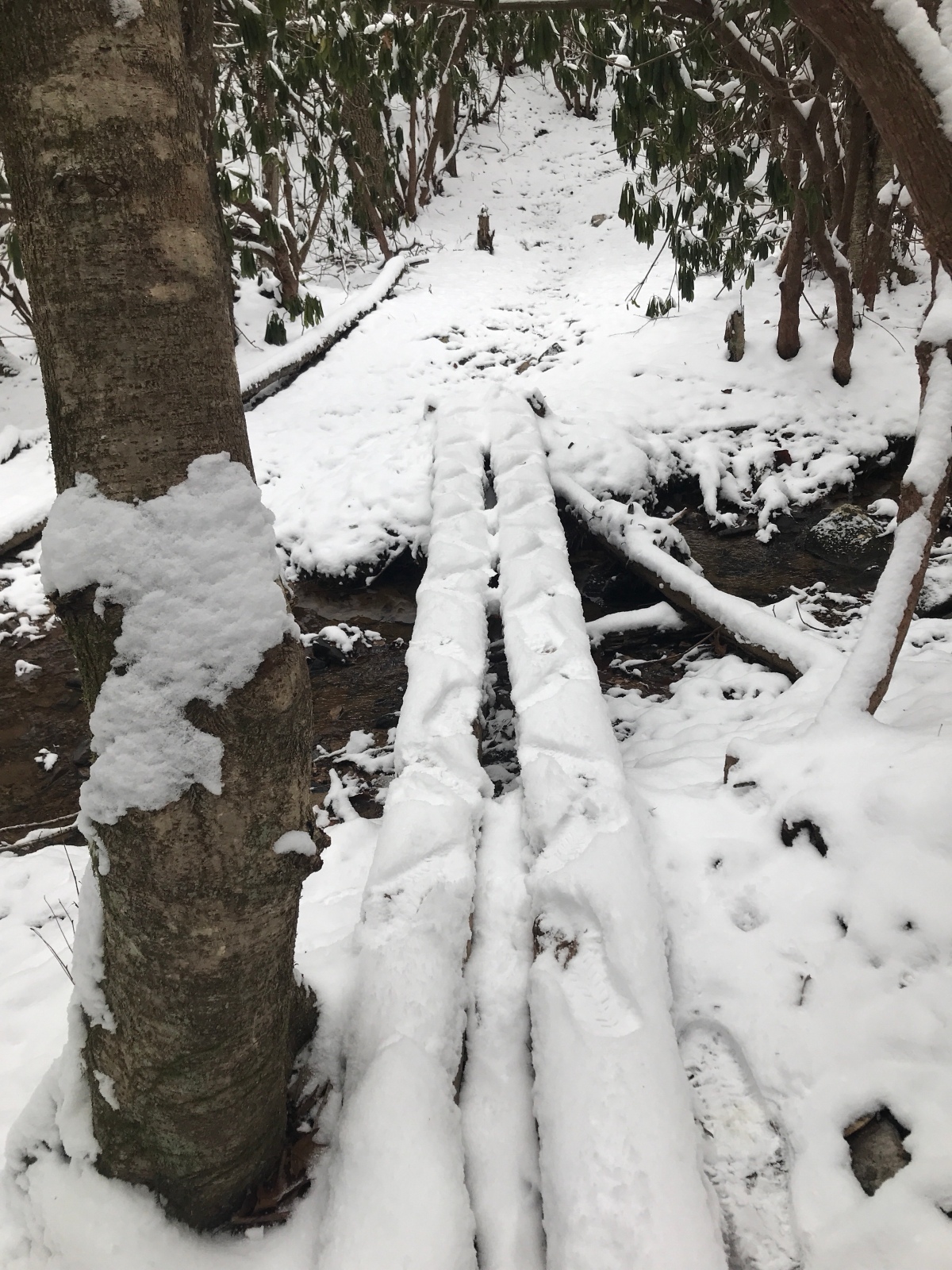 It’s been a long time working on getting these miles covered. It’s taken me almost exactly two years to hike from Springer Mountain, GA to Hanover, NH. That’s 1,747.7 miles. In that time, I’ve hiked some sections three or four times (Roan Highlands and Grayson Highlands, especially). I’ve hated some of it (Pennsylvania), I’ve loved most of it. I’ve made best friends and broken up with boyfriends, I’ve broken toes and made memories. I think almost every day about Christmas on the trial. My birthdays on the trail. New Years Eve on the Priest. Fourth of July in Pearisburg. Weekends spent studying for Dynamics of Machinery or Machine Design while eating dinner in my sleeping bag. Mice and porcupines and bears, moss and balsam firs and meteor showers.

And if you’re worried I won’t be doing much now that I’ve finally finished everything I can possibly drive to…Don’t worry. French Dip and I are already looking forward to our New Year’s Eve hike. 56.1 miles in North Carolina and Georgia. 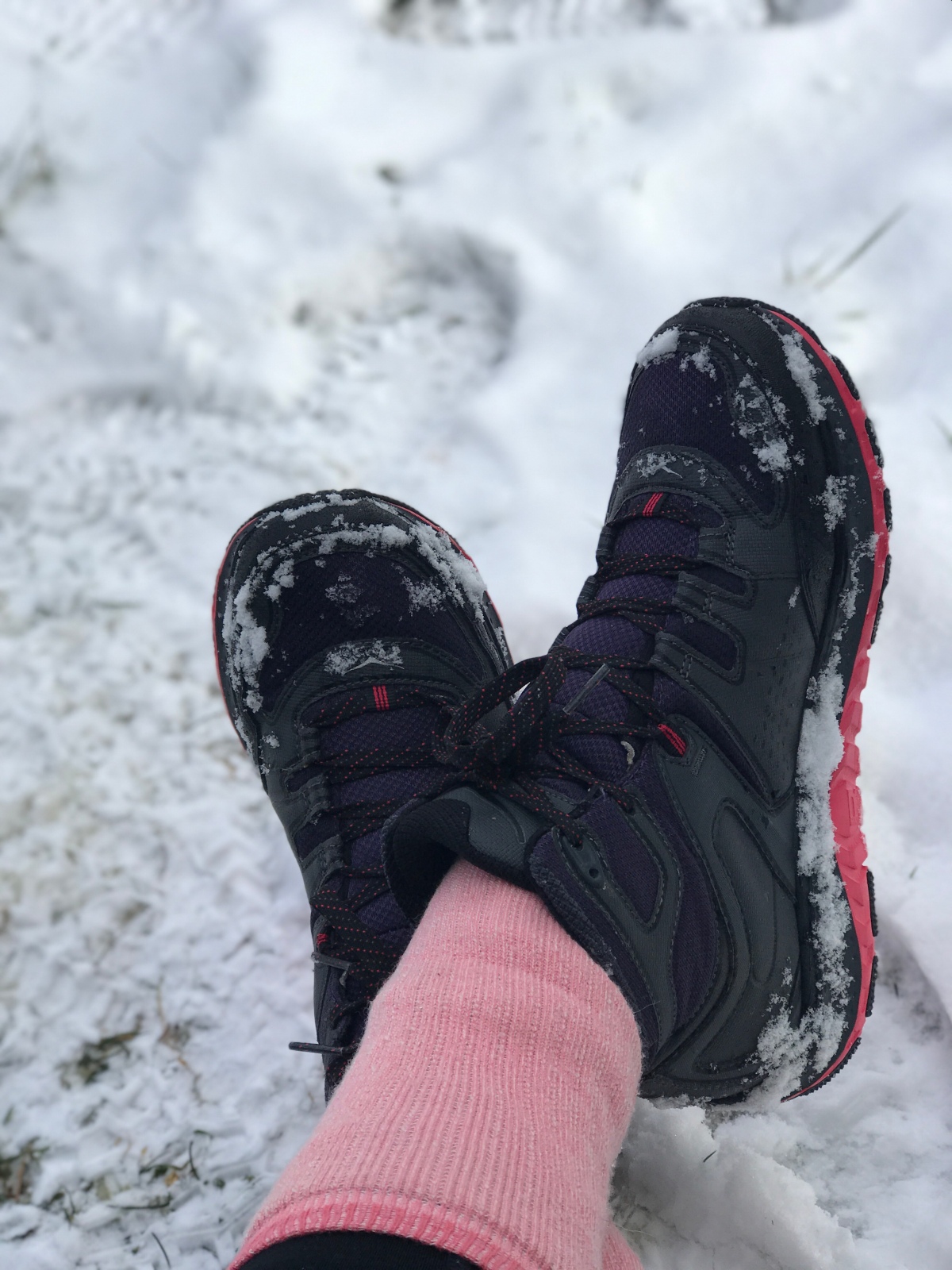 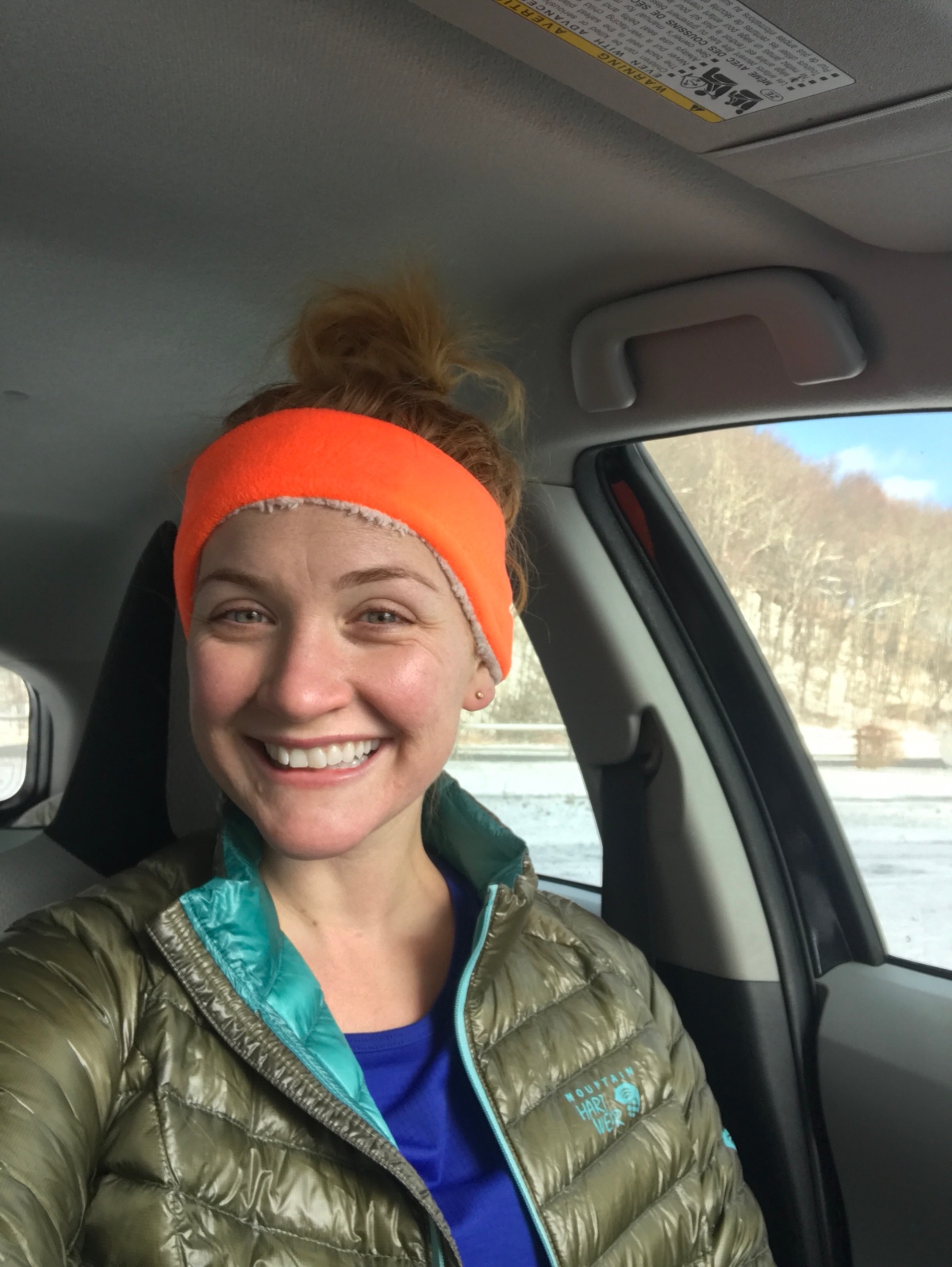 Until the next time, my friends! 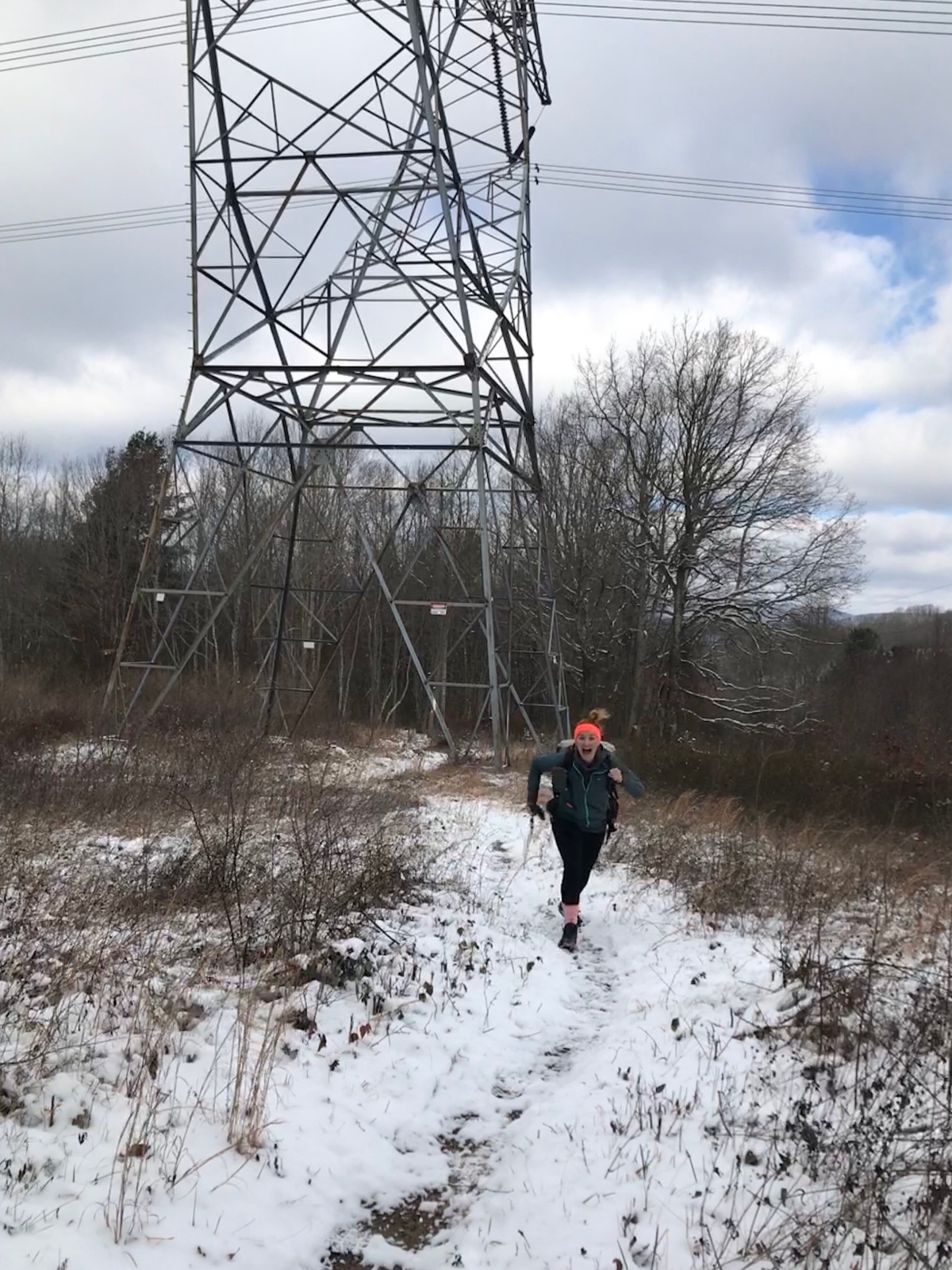